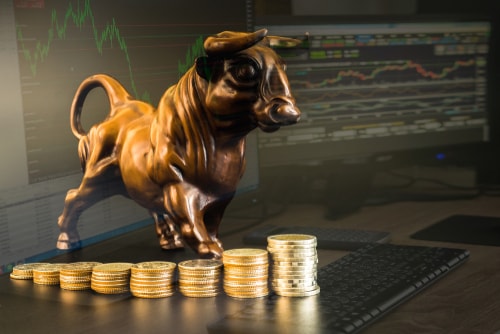 (Kitco News) - Gold is looking ready to re-start its bull run after five years of “caged trading,” which means the yellow metal could be looking at retracing its path to 2013’s peak of $1,700 an ounce, according to Bloomberg Intelligence (BI).

Gold’s breach of $1,400 an ounce and a surge to six-year highs has lit a fire under the bull run, which is looking strong at this point, McGlone noted.

“Gold's 2Q top-performer status is set to carry into 2H, in our view,” he wrote. “Seemingly unstoppable trends in increasing sovereign debt-to-GDP levels and declining bond yields are gold-price supportive. These macro trends need to reverse for the price of gold to not advance.”

Sustained trading above $1,410 is a sign of a renewed bull run and an indication that 2013’s peak of $1,700 an ounce will guide the metal’s price target resistance, McGlone pointed out.

“Gold needs a good reason to not fully retrace the big plunge year of 2013, which peaked at about $1,700 an ounce … Significant for ending 12 successive years of gains with the worst plunge in two decades, 2013's 28% decline broke the back of the gold bull. The midpoint of the 2013 range near $1,440 enhances the resistance zone gold has re-entered,” he said.

Higher gold prices are the most likely outcome for the second half of the year, with the peak U.S. dollar theory and the Federal Reserve rate cut expectations driving the rally.

At the time of writing, gold prices continued to see gains as Asian markets opened early on Wednesday, with spot gold trading at $1,434.30 an ounce, up 1.14% on the day, according to Kitco’s aggregated charts.

Investors should diversify away from bonds in 2022, hold 10% in commodities, including gold - WisdomTree