(Bloomberg) -- First, iron ore hit $100 a ton, then it raced straight to $110, and now spot prices are well north of $120: the commodity’s rally has been so strong it’s triggering warnings that the gains have taken the market beyond fundamental drivers and prices are likely set for a pullback. Futures tanked.

“Prices are disconnected from fundamentals at the moment,” CRU Group Senior Analyst Erik Hedborg said in an interview from London, citing improving global supply and expectations that mainland steel consumption may soften. “We are rather bearish on Chinese steel demand for the second half.” 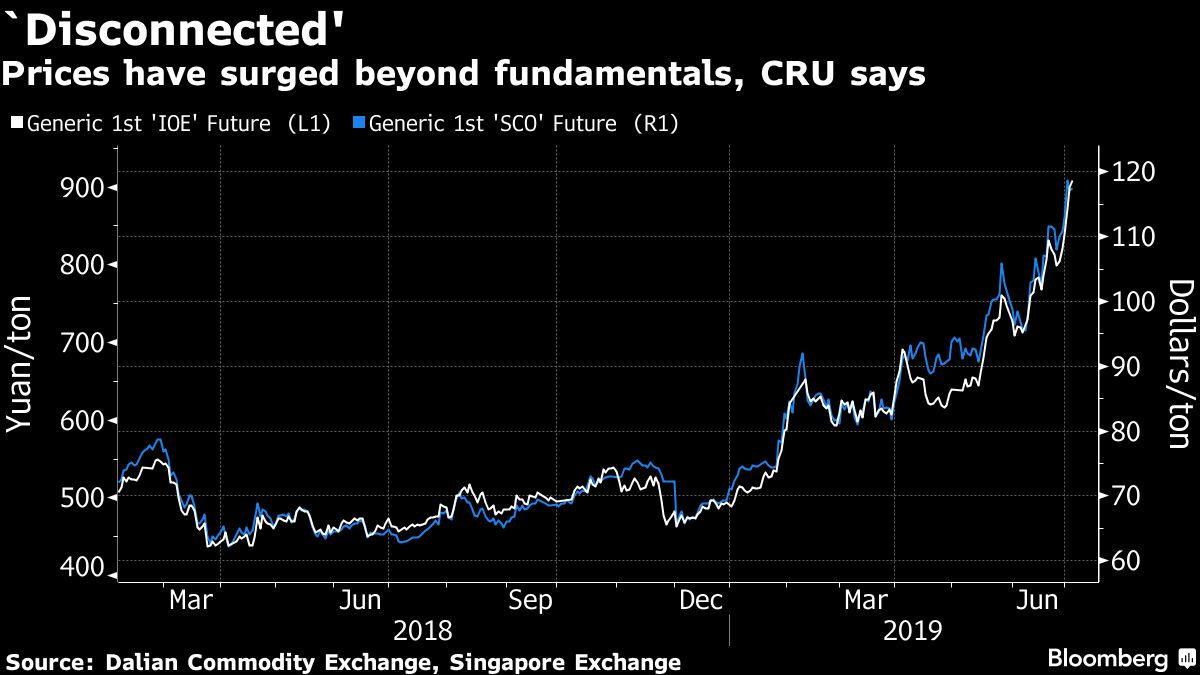 Iron ore has skyrocketed this year, hitting the highest level in more than five years, after a dam disaster at Brazil’s Vale SA and bad weather in Australia curtailed shipments just as Chinese demand expanded. The steelmaking material made another dash higher in recent weeks after Australian miner Rio Tinto Group cut output guidance again following operational problems. The ascent has spurred concerns the advance may prove to be unsustainable.

“Supply is looking pretty decent, with the exception of Rio,” Hedborg said. Exports from Australia in June should be strong as some miners ramp up in the last month of their financial year, he said. In Brazil, Vale has also restarted its Brucutu mine, a major operation that was suspended after the dam collapse.

Benchmark spot ore hit $127.15 a ton on Wednesday, the highest since 2014, according to Mysteel Global. Prices have risen for the past six days, the best run since 2017, after surging 18% in June. They are expected to hold near $100 this half and average $95 over the full year, according to Hedborg.

In the futures market, there are signs gains may be excessive. On the Dalian Commodity Exchange, prices have surged more than 75% this year, and the most-active contract’s 14-day relative-strength index had held above 70 for the past four days, a figure that suggests the rally may be overdone. On Thursday, futures in both Dalian and Singapore lost more than 4%.

There are also indications that seaborne supplies are picking up, with Hedborg emphasizing the restart in Brazil of Anglo American Plc’s Minas Rio operation, which had been shuttered for most of last year after two pipeline leaks.

Top miners including BHP Group are estimated to have shipped 301 million tons in the second quarter, up 14% from the January-to-March period, according to Sanford C. Bernstein & Co., which tracks vessels. In Australia, exports from Port Hedland -- the main maritime gateway in the top shipper -- set a record in May for that month. June figures are due in the coming days.

Other forecasters have flagged expectations for a softening of prices this half and into 2020. In its latest global market outlook, Australia’s Department of Industry, Innovation and Science forecast that free-on-board prices would average $80.10 a ton this year and decline to $61.40 in 2020. Morgan Stanley has predicted a gradual drop back to $90 a ton in the fourth quarter.

To contact the reporter on this story:
Krystal Chia in Singapore at kchia48@bloomberg.net

To contact the editors responsible for this story:
Phoebe Sedgman at psedgman2@bloomberg.net
Jake Lloyd-Smith