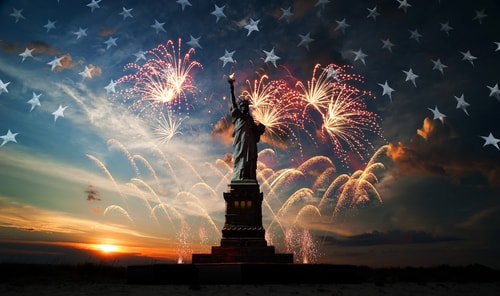 (Kitco News) - Little price action is expected as the U.S. celebrates Independence Day, but low liquidity during the holiday could trigger “stop hunting” in gold, forcing the metal to re-test its support levels, according to analysts.

“We aren’t expecting any major breakouts today on account of the U.S. being away for the fourth of July holiday, however as we saw in early European trade, the lack of liquidity could entice some participants to hunt stops,” MKS PAMP Groups said in a note on Thursday.

The longer-term outlook for the precious metal is price positive, according to Capital Economics, which sees gold and silver supported for the rest of the year.

Looser monetary policies around the world and slower economic growth are solid drivers that are not going away any time soon, said commodity economists at Capital Economics.

“Dovish shifts of stance by major central banks and a more downbeat outlook for global growth prompted inflows into safe-haven assets last month. We think that rising investor risk aversion will buttress gold and silver prices through the remainder of this year,” economists wrote on Thursday.

The global economy is projected to expand by 3.3% in 2019 in comparison to last year’s 3.6% pace, said RBC Capital Markets in a report.

“Marked by the 10th anniversary of global economic expansion, 2019 has been a year of slowed global growth as policy uncertainty continues to take its toll on the world’s economy. The prospect of a prolonged US-China trade war, the lack of clarity around Brexit, and political and economic upheaval in countries like Venezuela have combined to generate downside risks to the outlook. Data points to the global economy expanding by 3.3% this year,” RBC’s economists wrote.

Lower yields and capital flight are also contributing to gold’s recent move above the $1,400 an ounce level, TD Securities pointed out.

“The fact that Hong Kong dollar interbank rates are surging might be telling of capital flight that could also be contributing to the recent bid for gold. Gold's shine has primarily been driven by a sharp drop in yields as expectations for an imminent Fed cut saw investors fret over the possibility that rates may be on a one-way train to zero, along with increased portfolio and central bank demand,” strategists at TD Securities said.