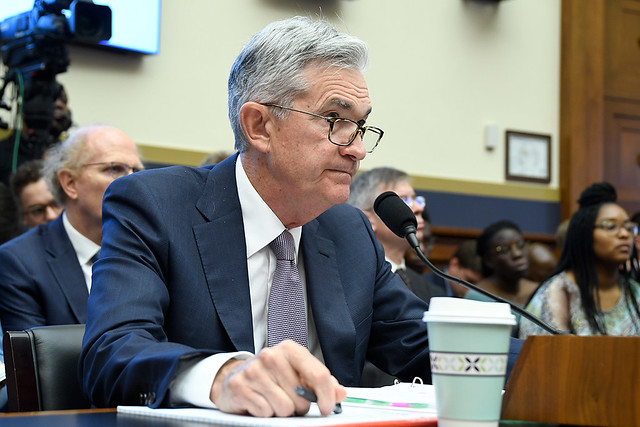 (Kitco News) - Federal Reserve Chair Jerome Powell poured some cold water on the suggestion of the U.S. embracing a new gold standard, telling Congress that it’s not a good idea.

His comments came following renewed focus on a new gold standard after one proponent of the idea was nominated to be a Federal Reserve governor.

While not commenting on any potential nominee, Powell said during his semi-annual testimony before the House Committee on Financial Services that he doesn’t think it would be a good move to adopt a new gold standard.

He explained that it would also take an act of Congress to shift the central bank’s current mandate on supporting maximum unemployment and price stability.

He added that a gold standard would force the Federal Reserve to stabilize the dollar price of gold.

“We would then not be looking at maximum employment or stable prices. There have been plenty of times in the fairly recent history where the price of gold has sent signals that would be quiet negative for these of those goals,” he said.

He added that the price of gold is not connected to the real economy like employment and inflation.

“If you assigned us to stabilizing the dollar price of gold, monetary policy could do that, but other things would fluctuate,” he said. “This is why every country in the world abandoned the gold standard some decades ago.”

Last week, President Donald Trump nominated Judy Shelton to be a board of governor of the U.S. Central bank, who has advocated for the U.S. to return to a gold standard to create a “reliable store of value across borders and through time.”

“It’s entirely reasonable to ask whether this might be better assured by linking the supply of money and credit to gold or some other reference point as opposed to relying on the judgment of a dozen or so monetary officials meeting eight times a year to set interest rates,” she said in commentary published in the Wall Street Journal April 21.

Powell’s comments in his first day of testimony on Capitol Hill have been positive for gold as prices pushed back above $1,400 an ounce after he highlighted growing uncertainty weighing on economic growth potential.