My Three Key Takeaways This Week

(Kitco News) - There's a few things that stood out for me this week: 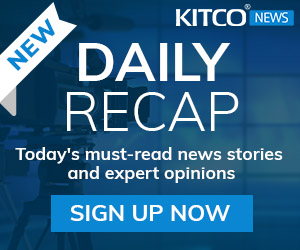 Kevin O’Leary, star of ABC’s Shark Tank joined me in our Wall Street studio this Tuesday, and he had a very strong message: Canada’s future hinges on drastic changes that need to happen in parliament.

“The country is a disaster,” O’Leary, chairman of O’Shares ETFs, said not mincing words.

His perspective is that the Canadian government has failed to attract investment capital and stimulate the economy. But it seems Canadian voters, which head to the polls this October, are not yet decided. A dead heat among voters over which leader is best suited to steer the Canadian economy appears to be breaking in Justin Trudeau’s favour.

The Liberal prime minister is pulling ahead of his main rival, Conservative Leader Andrew Scheer, on the question of who is best to lead the economy. According to a survey by Nanos Research Group for Bloomberg News, 31 per cent of respondents say they trust Trudeau most to promote economic growth compared with 26 per cent for Scheer.

In the meantime I’ll leave you with this quote from Mr. Wonderful: “It is so bad that if we got another four years of this I think you can take Canada down to probably zero growth rate,” he said.

My other special guest this week came all the way from Perth, Australia. The world’s largest gold coin, weighing in at 1 tonne and with a $50 million value, is truly impressive! It marked the first time the coin made the oversees voyage to New York City. The coin was on display for one-day-only outside the New York Stock Exchange. If you missed it, be sure to watch the video!

Finally, you all know about the praises gold has been receiving for its recent price action. Over the past 30 days, the metal is trading above $1,400 per ounce for the first time since 2013 and is up more than 12% year to date. That also represents a rally of more than 35% since it broke below $1,100 per ounce in late 2015.

And silver investors might be able to join the party soon. The metal is closing in on $17 an ounce and is up 6% this week. Silver is trading at highs last seen three years ago. Read the latest report from Anna Golubova.

Finally, the world is preparing to recognize and celebrate one of the greatest achievements in human history. July 20 marks the 50 anniversary of the Apollo 11 moon landing. Our editor Neils Christensen thought it would be interesting to explore the role gold has played in space discovery. A not to-be-missed weekend piece!

Have a great weekend folks!