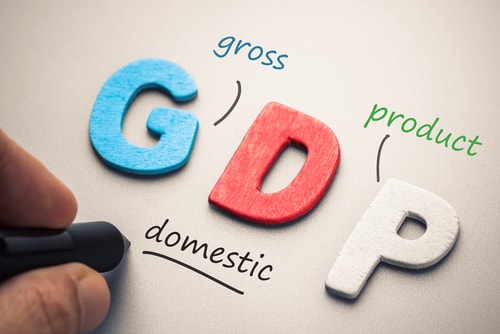 The preliminary estimate of the second-quarter gross domestic product showed that the U.S. economy slowed, growing at an annual rate of 2.1% versus the expected 1.8%. This is the first GDP reading after final Q1 results of 3.1%.

Gold prices lost some altitude following the GDP release with August Comex gold futures last trading at $1,416.60, up 0.13% on the day. Prior to the release, gold managed to climb back up above the $1,420 an ounce level.

“The deceleration in real GDP in the second quarter reflected downturns in inventory investment, exports, and nonresidential fixed investment. These downturns were partly offset by accelerations in PCE and federal government spending,” the report said.

On the inflation front, the results were mixed. The Personal Consumption Expenditures (PCE) Index rose 2.3%, up from 04% in Q1. Core PCE, which strips out volatile food and energy prices and is the Federal Reserve’s preferred inflation metrics, was up 1.8% compared to 1.1% posted in the previous quarter. The core measure missed analysts’ expectations of 2%.

The GDP data showed that there is no serious disinflation story happening in the U.S., said CIBC Capital Markets chief economist Avery Shenfeld.

“Overall, the data lean towards our view that we are headed for only a couple of quarter point insurance cuts from the Fed, rather than a major easing cycle,” Shenfeld said on Friday.