Two Scenarios For Gold Next Week As Fed Reveals Its Hand 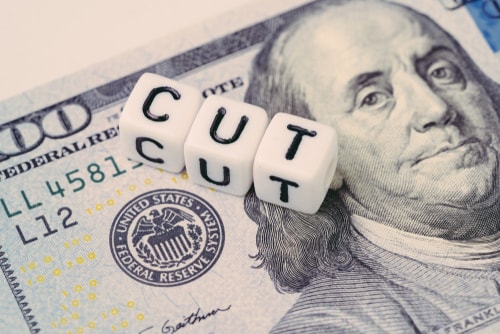 (Kitco News) - Next week can play out one of two ways — the Federal Reserve introduces a 25-basis point rate cut and gold consolidates, or the central bank doubles down on easing with a 50-basis point cut and gold rallies to new highs, analysts told Kitco News.

Markets are widely expecting for the Fed to begin its easing cycle, but what will matter the most is whether the central bank is embarking on a major easing cycle or just a couple of rate cuts.

“The fact that overall the U.S. economy is not dropping off a cliff is consistent with our view that we are only looking for a quarter-point cut now, another quarter-point cut before the end of the year, and then the Fed going on hold in 2020,” said CIBC Capital Markets chief economist Avery Shenfeld. “For the Fed to continue on cutting into 2020, you’ll have to have the economy remain very slugging next year.”

Gold is likely to consolidate but hold above the $1,400 an ounce mark if the Fed sticks to a 25-basis point cut this Wednesday.

“[The metal] might go a little bit lower because there is still a portion of the market that is expecting a 50-basis point cut next week. Ultimately, we’ll get a 25-point cut and we’ll [see] a bit of a re-pricing lower in gold,” said TD Securities commodity strategist Ryan McKay.

A break lower in gold and testing of the $1,400 level is most likely in a quarter-point cut scenario, said LaSalle Futures Group senior market strategist Charlie Nedoss.

Overall, gold is expected to remain a great long-term buying opportunity to investors, McKay added. “Ultimately, any dip will be a buying opportunity for the longer-term … Gold is very well supported due to global central banks shifting to this easing tone,” he said.

The U.S. GDP data from Q2, which came in slightly better-than-expected, will play a role in the Fed’s decision, especially when it comes to inflation.

With the U.S. economy slowing to 2.1% in Q2 and Fed’s key inflation metric — core PCE (Personal Consumption Expenditures) — coming in below expectations at 1.8%, it might just be enough to see the Fed cut rates by 25 basis points.

“Core PCE at 1.8% is further ammunition for the doves at the Fed meeting next week,” McKay noted.

The overall economic slowdown, however, was not particularly severe, noted Shenfeld, which is why a 25-basis point cut is the likely scenario.

“The items that the Fed is worried about — a decline in global growth rate, the impacts of trade wars on exports, and the impacts on business confidence all showed up in the report,” he said. “A modest dose of interest rate relief will help turn the corner on housing, which has been a drag and support on the continuation of reasonable growth and consumer spending, which together should be enough of a tailwind to offset the drag from a softer global economy.”

A major cut by 50 basis points would see gold rally to fresh multi-year highs and test the $1,454 levels and possibly higher, according to analysts.

“If the Fed does a 50-point cut, we would come back up and test those recent highs $1,454-40,” said Nedoss. “What gold is looking at is that we are in an easing cycle, but where are we in that cycle. We started the year by talking about one rate cut, then two, then three, then back to two.”

McKay is watching the range of $1,440 and maybe a little bit below $1,400 heading into the FOMC meeting next week.

The path of least resistance for gold still remains higher with bulls having a solid overall near-term technical advantage.

“A two-month-old uptrend is in place on the daily bar chart. Bulls’ next upside price objective is to produce a close in August futures above solid resistance at $1,500.00. Bears' next near-term downside price breakout objective is pushing August futures prices below solid technical support at $1,400.00. First resistance is seen at $1,425.00 and then at this week’s high of $1,434.10. First support is seen at this week’s low of $1,411.10 and then at $1,410.00,” said Kitco’s senior technical analyst Jim Wyckoff.

What Else To Watch

A central thing to watch on the global front is how other economies are growing this summer, with a majority of key central banks turning dovish this year, including a new stimulus package that is likely to be introduced by the European Central Bank (ECB) this September.

“[The ECB announcement this week] plays into the global theme of central banks easing and the negative-yielding debt pile continuing to surge. This makes gold a more attractive hold for the longer-term,” McKay stated.

Other items on the radar next week are the U.S. employment report, the ISM manufacturing index and U.S.-China trade talks.

“We expect to learn on Thursday that the ISM manufacturing index slipped to a three-year low of 51.5, while we expect news on Friday that non-farm payrolls increased by a muted 145,000 in August. Otherwise, Treasury Secretary Steven Mnuchin and Trade Representative Robert Lighthizer are off to China to resume high-level trade talks. We don’t anticipate any major breakthrough, but the fact that the principals are meeting in person again suggests that some progress has been made,” wrote Capital Economics chief U.S. economist Paul Ashworth.

#ECB LIVE: "The risks remain tilted to the downside related to geopolitical factors, the rising threat of protectionism and vulnerabilities in emerging markets" - #DRAGHI pic.twitter.com/Txi9LtOWSe