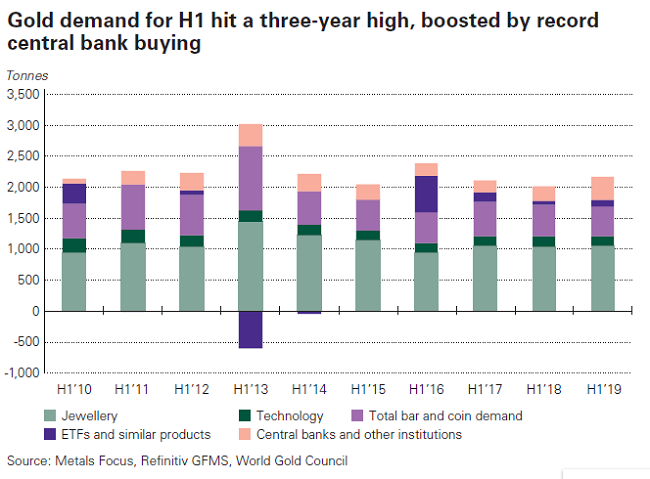 (Kitco News) - Central banks’ insatiable appetite for gold dominated the marketplace between April and June, according to the latest data from the World Gold Council (WGC).

In its second-quarter Gold Demand Trends report, the council said that central banks bought a total of 224 tonnes of gold between April and June. Official gold reserves increased by 374.1 tonnes in the first half of the year — “the largest net H1 increase in global gold reserves in our 19-year quarterly data series,” the analysts said in the report.

“Buying was again spread across a diverse range of – largely emerging market – countries,” the WGC said.

The WGC said that nine central banks bought gold in the first half of the year.

“Central banks, like other investors, sought safety in gold as they looked to protect themselves in the face of many looming risks,” the analysts said.

“Indian demand was boosted early in the quarter by the wedding season and festival buying, before slowing sharply as the gold price rallied in June,” the report said.

The WGC noted that India’s gold demand faces strong headwinds as purchases have come to a “virtual standstill.”

“The slowing economic environment and restrictions on the movement of cash during the elections were a drag on demand in April and May,” the report said.

The India gold market was also hit with higher tariffs in early July with import duties rising to 12.5% from 10%.

“Although we do not expect this to have a long-term impact on gold demand in India, we do see it having a dampening impact on Q3, particularly as gold prices have remained elevated,” the WGC said.

“Demand ground to a halt once the June price rally began and retailer’s promotional efforts could not tempt consumers back. Reportedly, showrooms were deserted as the quarter came to a close,” the analysts said.

The gains were predominantly seen in June as the month saw inflows of 126.7 tonnes, reversing April’s outflows of 57.2 tonnes. The WGC said that total hold holding reached a six-year high of 2,548 tonnes in the first half of the year.

“Geopolitical uncertainty, dovish monetary policy commentary by central banks, and a rising gold price were among the key factors that drove investors to increase their holdings,” the analysts said.

The WGC highlighted the growing trend of European and U.K. investors leading the way in the gold market. It noted that U.K.-listed funds accounted for 75% of all global inflows during the second quarter.

“Investors sought the safe haven of gold amid the uncertainty surrounding Brexit and the leadership battle that followed Theresa May’s resignation as Prime Minister,” the analysts said. “The sharp drop in the value of the pound also fueled inflows during the quarter as the U.K.’s growth prospects were cut following repeated failures in Brexit negotiations.” 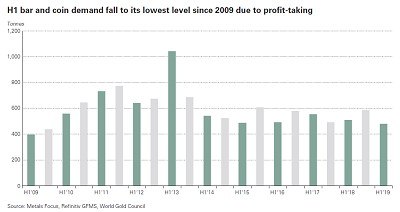 Although investors have been jumping into gold-backed ETFs, interest in physical gold was fairly muted. The WGC said that gold coin and bar demand dropped 12% in Q2 to 476.9 tonnes, the lowest level since 2009. They noted that June’s sharp price rally has weighed on physical demand.

“This market has been struggling for some time, with many traditional gold investors focused on America’s healthy economic growth, low unemployment, and continued wage growth,” the WGC said. “The gold price rally in June triggered selling by some investors, and coin premiums in the secondary market fell to their lowest level since before the global financial crisis, spurring gold exports from the US to Germany.”

Although not a significant factor for the physical gold market, analysts said that the tech sector saw gold demand drop by 3% in the second quarter to 81.1 tonnes.

“This was the third consecutive quarter of falling demand, due to a range of challenges in the electronics sector, including the ongoing trade dispute between China and the US. However, there are signs of recovery and we expect declines to continue to slow throughout H2 2019,” the WGC said.

The council noted that robust gold demand is being met with strong production; the analysts said that gold supply increased by 6% in the second quarter to 1,186.7 tonnes. The supply was led by record gold production between April and June.

The WGC added that gold production increased by 2% to 882.6 tonnes in the second quarter. “This is a record level of global output for a second quarter and follows on from a Q1 record of 847.5t.

The WGC also noted an increase in recycled gold as consumers sold into higher prices late in the quarter. 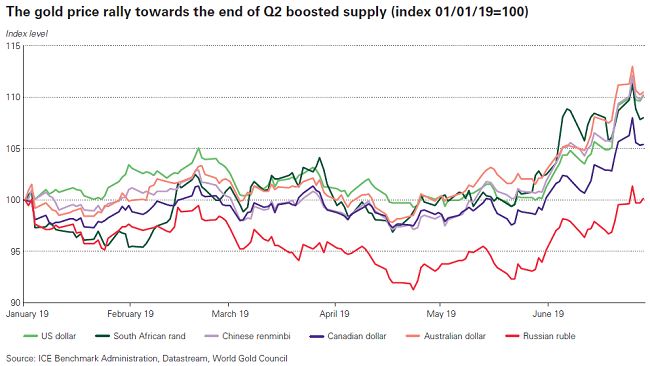