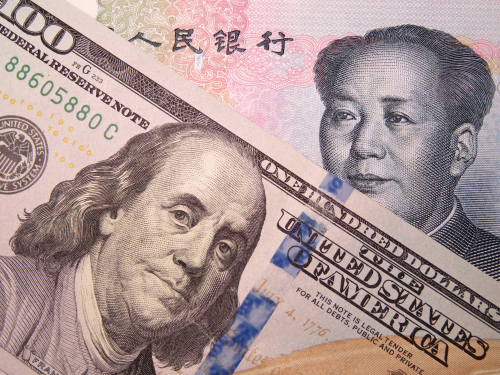 (Kitco News) - Fear is surging through financial markets and investors are jumping into gold as the U.S.-China trade war has turned into a currency war. The next target for gold in this environment is clearly $1,500 an ounce, analysts said.

Overnight, the Chinese government let the yuan rise above 7 against the U.S. dollar for the first time in more than a decade. Along with the government allowing its currency to weaken, China has directed state-owned companies not to buy U.S. agricultural goods.

“The trade war has turned bad as it has ever been and you are starting to see investors jump into safe haven assets like gold and U.S. Treasuries,” said Bill Baruch, president of Blue Line Futures. “I don’t think we are at peak panic yet so gold has room to move higher. Gold is being driven by strong fundamental demand.”

The latest evolution in the U.S.-China trade war is weighing on U.S. economic growth and that is causing markets to price in further interest rate cuts from the Federal Reserve. The CME FedWatch Tool shows that markets see a more than 16% chance of a 50 basis point cut at the next meeting in September.

The aggressive forecast for more monetary policy easing has caused 10-year bond yields to fall to nearly a three-year low. The yield on U.S. 10-year last traded at 1.78%.

The drop in bond yields is really what is driving gold prices, said Fawad Razaqzada, technical analyst at City Index. Razaqzada added that he doesn’t expect sentiment to change anytime soon, noting that sentiment has completely shifted since the Fed’s last monetary policy decision less than a week ago.

“Because of all the new uncertainty and escalating trade war I think it would be a mistake for the Fed not to cut again in September,” he said. “A new easing cycle will continue to drive gold higher.”

Both Baruch and Razaqzada said that they see $1,500 as the next likely target for gold in the near-term. Baruch added that there is some major resistance around $1,485 as that is the 50% retracement level from gold’s 2011 highs to the 2015 lows.

Many economists and market analysts have said that the trade war could get a lot worse before it gets better.

“The fact that the Chinese central bank allowed the yuan to fall through the 7 mark against the U.S. dollar without intervening is a clear indication that Beijing means business,” said David Madden, market analyst at CMC Markets. “There is a feeling that China could inflict a lot more pain on the U.S. in terms of the trade spat, and many traders are worried the economic conflict will rumble on for some time.”

Hussein Sayed, chief market strategist at FXTM, said with the rising trade tensions moving into currency markets, its becoming more unlikely that the dispute will be resolved before the 2020 elections.

“Until then expect volatility to return to global financial markets with safe haven assets to be the main beneficiaries,” he said. “Out of all safe haven assets, gold will be our favorite, especially if this trade war gets out of hand.”