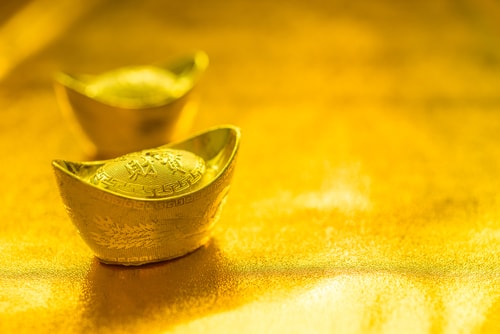 (Kitco News) - Chinese central bank continued to stock up on gold for the eighth month in a row in July amid escalating trade war tensions, according to the data from the People's Bank of China (PBOC).

The country’s gold reserves rose to 62.26 million ounces from June’s 61.94 million ounces, which equated to about 10 tons bought in July, the central bank’s data showed.

The bank has been purchasing gold on a monthly basis since December, increasing the value of total gold reserves as of the end of July to $88.9 billion.

“At the central bank level [the move] is definitely to de-dollarize,” Hamilton said.

China’s gold percentage of total reserves, however, is still very small considering that the Asian country is the number one gold producer and consumer in the world.

The central bank’s foreign exchange reserves were at $3.1 trillion at the end of July, according to PBOC figures.

Aside from the central bank, Chinese investors have also been very interested in gold. But, they have been buying the yellow metal for a different reason — it provides the safest and easiest U.S.-dollar denominated asset they could own while their currency depreciates, added Hamilton.

“With RMB depreciation investors in China want to hold U.S. dollar-denominated assets and one of the easiest ones they can get their hands on in an environment of capital controls is gold,” he said.

China is among many other central banks that are increasing their gold purchases as a way to diversify portfolios, according to the latest data from the World Gold Council (WGC).

Official gold reserves increased by 374.1 tonnes in the first half of the year — “the largest net H1 increase in global gold reserves in our 19-year quarterly data series,” WGC said in its second-quarter Gold Demand Trends report.

The council added that central banks bought a total of 224 tonnes of gold between April and June. “Buying was again spread across a diverse range of – largely emerging market – countries,” the WGC said.