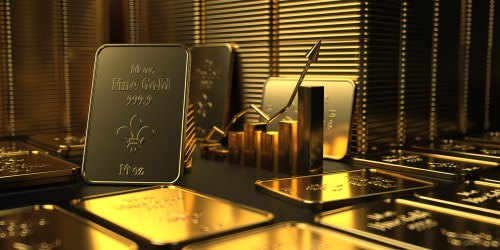 (Kitco News) - The yellow metal has strong momentum behind its latest move above $1,500 an ounce — the highest level since 2013, according to analysts.

“Gold has room to grow … Given that we just had a fairly extensive pause between $1,400 and $1,450, I don’t expect a [halt now]. Looking at the interest rates and general trajectory of yields and uncertainty over the trade war, gold has room to move higher from here — $1,550 is probably a level I’d be looking at,” Lawler said.

At the $1,500 level, gold is pricing in a lot of the positive macroeconomic news, but it doesn’t rule out a move higher, said BMO Capital Markets managing director of commodities research Colin Hamilton.

“We are trading the top range of the range … From a macroeconomic perspective, there will be support there over the coming months [and] $1,550 may come sooner rather than later because we have a bit momentum coming through. It is possible, but I’d question whether that is sustainable,” Hamilton said.

More sustainable longer-term levels for gold, however, are between the $1,375-$1,475 range, added Hamilton.

Gold has rallied to all-time highs in a number of currencies, notably in British pounds as well as the Canadian and Australian dollars. This surge points to a strong U.S. dollar holding gold back, added Lawler. “It is only dollar strength that is holding gold back in U.S. dollars … Gold is in a major bull market,” he said.

Going forward, the precious metal is likely to move up in unison with the U.S. dollar more times than before, which is what makes this rally sustainable, described Lawler.

“The inverse correlation between gold and the U.S. dollar is going to fluctuate more than it normally does. Overall, there is going to be more periods than normal where gold and the dollar rise together,” he said.

“The fact that gold can rally along with the U.S. dollar is because yielding assets are getting less attractive because yields are heading lower. Gold is a non-yielding asset and it stands to perform better as a result of all those interest rate cuts and speculation that we are headed back for another round of quantitative easing,” Lawler stated.

Investors worldwide, especially in China, are looking at gold not only for protection but also as a safe, U.S. dollar-denominated asset at the time of currency wars, said Hamilton.

“With RMB depreciation investors in China want to hold U.S. dollar-denominated assets and one of the easiest ones they can get their hands on in an environment of capital controls is gold,” Hamilton said.

The primary overnight triggers for gold have been a surprise move by a number of Asian central banks to cut rates more than expected, including the New Zealand central bank’s 0.5% cut, and a drop in U.S. Treasury yields.

“The move from those central banks seemed almost coordinated and confirmed the dovish bias that central banks are taking and the corresponding moves in U.S. Treasury yields reflecting that. If you are looking at U.S. Treasuries as a global benchmark than it is reacting to overseas movement in interest rates,” Lawler said.

As summer wraps up, investors should keep a close eye on gold-backed ETF flows as they have a big influence on short-term gold moves, Hamilton pointed out. Other things to watch would be U.S. growth expectations and gold flows between Hong Kong and China, he highlighted.

All eyes will also be turning to the next Federal Reserve meeting in September soon, with markets currently overpricing a chance of a rate cut, according to Capital Economics U.S. economist Andrew Hunter.

“The markets have probably gone a little bit too far in pricing in more than 100 basis points of cuts between now and this time next year,” Hunter said on Wednesday. “We still expect two more 25-basis-point cuts in our forecast.”

Escalating trade war tensions are only likely to boost the Fed’s case for cutting rates further this year, but the September 25-basis-point cut is not a done deal yet, added Hunter.

“We’ve seen a pretty rapid escalation of the trade dispute over the past few days. That clearly makes it more likely that the Fed will be looking to provide more support to the economy. Fed Chair Powell emphasized quote frequently how trade uncertainty was playing into their decision to cut rates last month,” he said.