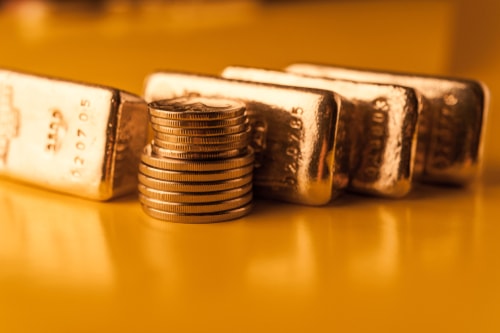 (Kitco News) - The gold market is carefully eyeing the rising tensions in Hong Kong as some analysts warn of possible further escalation.

Tensions between Hong Kong and China could reach a boiling point following reports that China is moving its troops closer to the border with Hong King.

U.S. President Donald Trump took to Twitter on Tuesday, stating that “our Intelligence has informed us that the Chinese Government is moving troops to the Border with Hong Kong. Everyone should be calm and safe!”

Prior to that, there were reports of activists clashing with police at Hong Kong’s international airport after flights were disrupted for the second day in a row.

Our Intelligence has informed us that the Chinese Government is moving troops to the Border with Hong Kong. Everyone should be calm and safe!

The news pushed gold higher on Tuesday afternoon following a brief drop below $1,500-an-ounce level on easing U.S.-China trade tensions. At the time of writing, December Comex gold futures were trading $1,511.80, down 0.36% on the day.

“Gold … rebounded from stronger losses in late-morning and midday trading when reports said Hong Kong riot police were confronting demonstrators at the Hong Kong airport,” said Kitco’s senior technical analyst Wyckoff. “President Trump also tweeted at midday that China is moving troops closer to the Hong Kong border. This situation is deteriorating, with many worried about a very ominous outcome.”

This marks the 10th week of protests in Hong Kong, which began as a response to a planned extradition law.

“Political tensions in Hong Kong are nearing a boiling point. If mainland China police forces go into Hong Kong, then all bets are off. That is not our base case and so our investment outlook hinges on some sort of negotiated political settlement occurring,” BBH Global Currency Strategy head Win Thin said on Tuesday. “The extradition law has been suspended, but protestors want its full withdrawal.”

The United Nations human rights commissioner, Michele Bachelet, called on local authorities to exercise restraint. “The Office urges the Hong Kong SAR authorities to act with restraint, to ensure that the right of those who are expressing their views peacefully are respected and protected,” spokesperson Rupert Colville said in a statement.

Local government’s response to activists has been hardening, BBH’s Thin pointed out.

“Use of tear gas and rubber bullets has picked up, as have physical altercations using billy clubs. The primary goal of dispersing the protestors has been replaced with arresting them,” he said.

Even though the odds of Chinese military involvement are rising, BBH remains optimistic that a solution will be found. “For now, we suspect this is just an implied threat and an intimidating show of force.”

If China intervenes, it could lead to a major market selloff, Thin added. “Any heavy-handed efforts by the mainland to crack down on the Hong Kong protests will directly feed into investor concerns … That in turn will call into question the entire rule of law in Hong Kong and markets will tank. Once lost, trust and credibility may never be regained.”

“We have an outside chance of prices getting to $1,600 this month, but predicated this on perhaps China moving aggressively against protestors in Hong Kong, something that looks like an increasing possibility given the chaos that has engulfed the island,” INTL FCStone Independent Commodity Consultant Edward Meir said in his August report.