What Does Gold Need To Stay Above $1,600? Wells Fargo Makes A List 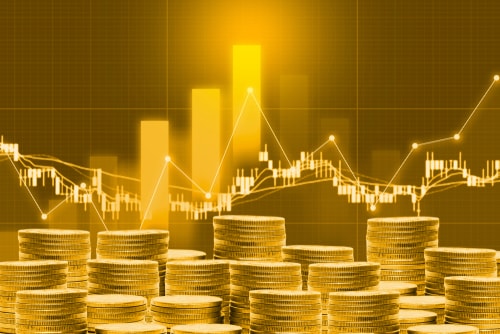 (Kitco News) - Can gold hit $1,600 an ounce in the near-term and stay above that level? Wells Fargo asked this question in the latest note to clients, making a list of events required to keep gold elevated.

The rally pushed gold up by $100 per ounce in just four sessions, opening up new levels for the metal well above $1,500 an ounce, the analyst noted.

“It took gold only four trading sessions to increase $100 per ounce (from the intraday low on August 1, 2019 to August 7). In doing so, gold convincingly confirmed its breakout above the major psychological and technical resistance level of this cycle, $1,400. Since 2013, gold has had four unsuccessful prior attempts to break the $1,400 level. As recently as the end of May, gold had been trading at $1,275,” he said.

Behind this rally is a number of factors that need to persist throughout 2019 to keep prices elevated at these levels, according to Wells Fargo.

The bank’s list includes all the major culprits that have been supporting gold this summer, such as growing negative-yielding debt, volatility in equity markets, global easing, trade tensions, major global growth concerns, and worries around possible currency wars.

“Interest rates across the globe have collapsed; the amount of global negative-yielding debt has swelled; equity volatility and global growth concerns have spiked; the Fed and other central banks have switched from tightening to easing; trade disputes have escalated; and monetary uncertainty has increased. (The Chinese yuan breached the psychologically important seven yuan per U.S. dollar level, and the U.S. labeled China a currency manipulator, which has increased market concern of a pending currency war.)…all of which makes gold look more attractive,” Pickle wrote. 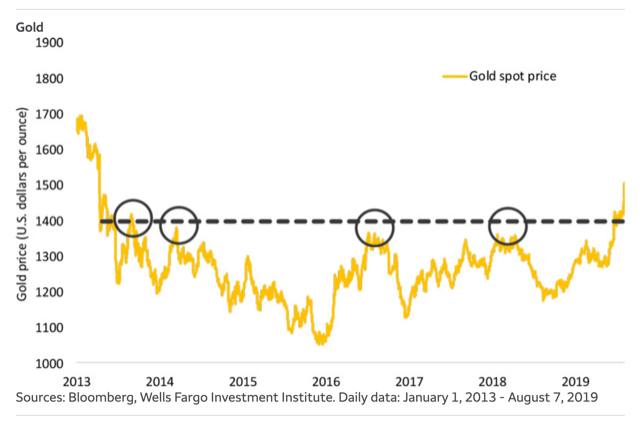 To move gold towards $1,600 an ounce and for prices to remain there, the bank’s list of tensions and global concerns will need to be heightened. Otherwise, Wells Fargo does not see gold as sustainable at $1,600 or higher.

“For gold to keep moving higher, and hold above $1,600, we believe that we would have to see another heightened round of the concerns listed above,” Pickle said. “These concerns could remain for the remainder of 2019, we are skeptical that they will become meaningfully worse.”

Wells Fargo’s own outlook states that a lot of the fear has already been priced in by gold and there is limited room to move higher from here.

“Above $1,500, gold already appears to have baked in a lot of fear … We are skeptical that concerns will become meaningfully worse enough to push gold much further than recent highs,” Pickle wrote.