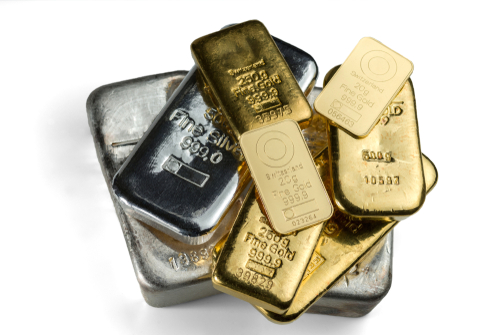 (Kitco News) - The gold market's push to a six-year high prompted some hedge funds to take some profits off the table, according the latest trade data from the Commodity Futures Trading Commission (CFTC).

The CFTC's disaggregated Commitments of Traders report, for the week ending Aug. 13, showed money managers dropped their speculative gross long positions in Comex gold futures by 3,056 contracts to 245,631. At the same time, short bets rose by 166 contracts to 22,020.Gold's net-long positioning currently stands at 226,833 contracts, a 1.4% decrease from the previous week.

Although the gold market saw a small decrease in its net-long positioning, it still remains at a two-year high.

"There are a lot of longs in the marketplace and I think a correction is in the cards," said Sean Lusk in a recent interview with Kitco News. "I think the gold market has gotten a little ahead of itself.

During the last day of the CFTC's survey period gold prices rallied to a six-year high at $1,546.10 an ounce. Some analysts have said that the profit taking has been a welcome move as some have seen the three-month rally as unsustainable.

"The violent $55/oz retracement from $1535/oz was more an indication of how crowded the trade has become than a change in the fundamental outlook," said Ole Hansen, head of commodity strategy at Saxo Bank.

Gold's rally to a fresh multi-year high last week coincided with an inversion of the 2-year/10-year yield curve as the yield on the two-year bonds rose above the 10-year note for the first time since 2007. Market participants have been paying particular close attention to the spread between 10-year and 2-year bonds as an inversions of the curve has preceded every recession over the past 50 years.

Although it appears that investors are taking some profits in gold, Hansen said that the market still remains in a strong bullish uptrend. He added that he is watching $1,480 as the first important support level.

"Just like $1380/oz was the support following the July breakout, the next support level to focus on now is the $1480-85/oz area with a break below signaling a period of consolidation but not a reversal," he said.

However, the futures market might not be the biggest factor driving prices in the gold market.

Analysts at Commerzbank said that there is still high demand for gold as a safe-haven asset, even as hedge funds didn't increase their speculative positioning. "ETF investors did continue to buy gold – just shy of 12 tons last week," the analysts said.

While gold continues to attract investors, silver is struggling to attract the same interest.

The disaggregated report showed money-managed speculative gross long positions in Comex silver futures fell by 10,716 contracts to 78,429. At the same time, short positions rose by 2,186 contracts to 44,469. The short-covering in the marketplace pushed silver net positive for the first time since early February. Silver's net length currently stands at 33,960 contracts.

"Amid fears of a global manufacturing recession, money managers ultimately opted to rid themselves of their net length in silver, with long positioning posting a noteworthy decline," said commodity analysts at TD Securities.
The drop in silver's net-length came as prices pushed to $17.50 an ounce, its highest level since late January 2018.

Commerzbank analysts noted that silver ETF demand is also a significant factor in the marketplace.