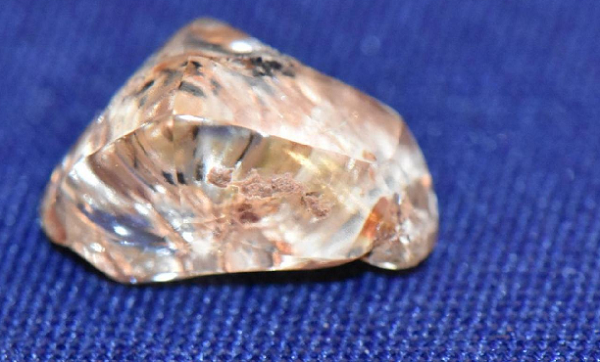 (Kitco News) - A last minute idea for a fun family trip turned into a priceless experience for one Texas woman, after finding a rough yellow diamond in an Arkansas state park.

According to media reports, Miranda Hollingshead of Bogata Texas was visiting Arkansas’s Crater of Diamonds State Park when she stumbled upon a 3.72 carat yellow diamond.

“I was sitting in the shade, watching a YouTube video on how to find diamonds. I looked over at my kid for a second, and when I looked down, I saw it mixed in with other rocks,” said Hollingshead in a park press release.

“Every diamond found at the park is beautiful in its own way, and this one is certainly no exception,” said Park Interpreter Waymon Cox in the written statement.

Crater of Diamonds State Park is a unique experience and is one of the only places in the world people can search for real diamonds. The 37-acre property is an ancient diamond bearing volcanic pipe. The park regularly plows the field to loosen the soil and help along the natural erosion process.

Cox noted that recent rainfall may have helped Hollingshead with her unexpected discovery.  “Much of the ground where Ms. Hollingshead found her diamond is made of unweathered volcanic rock. When it rains, flowing runoff often leaves loose gravel, and sometimes diamonds, on the surface in these areas,” she said.

Officials said that so far this year 319 diamonds have been registered at the part, weighing a total of 63.49 carats. Of those 13 diamonds have weighed at least one carat each.

In total, over 75,000 diamonds have been unearthed at the Crater of Diamonds since the first diamonds were discovered in 1906 by John Huddleston, a farmer who owned the land long before it became an Arkansas State Park in 1972.

The property is also where the nation’s largest diamond was discovered in 1924; the rough diamond and was named Uncle Sam, weighing at 40.23 carats.