(Kitco News) - Gold investor should start paying more attention to the mining sector as it outperforms the precious metal, and one London analyst has two major producers on his radar. 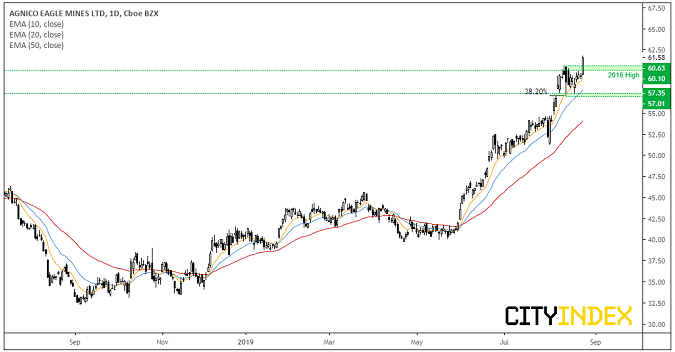 Matt Simpson, senior analyst at City Index, said that he is keeping a close eye on the GDX/GLD ratio as it looks to hit its 2016 highs. He added that if the ratio sees a similar move to the one back into 2016, the investors could see it push to 2012 levels.

"It's worth noting that the ratio began to rise in 2016 when investors were concerned of a global slowdown, and that we find ourselves in similar conditions today," he said.

Since late May the major producers have moved in lock step with gold prices. The world's biggest gold-backed exchange traded fund, SPDR Gold Shares (NYSE: GLD), is up nearly 21% since its May lows. GLD last traded at $145.34 a share; meanwhile, in the same time frame, the VanEck Vectors Gold Miners ETF (NYSE: GDX), which tracks the top gold producers, is up nearly 50%, last trading at $30.56 a share.

Simpson had two trade recommendations for investors: one to go long the GDX and short gold and the other to invest in specific companies listed in the ETF.

He added that the two companies he likes in the list are Agnico Eagle Mines (NYSE: AEM, TSX: AEM) and Kinross Gold (NYSE: KGC, TSX: K).

"Agnico-Eagle Mines closed at a near 8-year high on Friday and has clearly broken out of compression," he said.

He explained that he sees strong support for AEM at $57 a share with resistance coming in at $73 a share.

Looking at Kinross, Simpson said that he likes the idea of buying dips above $4.81 a share with a target of 5.81.

"Kinross Gold Corp CFD has broken out of a corrective channel and appears poised to break above the 5.17 high," he said. "Price action is almost a mirror image of the GDX/XAU ratio so, if the ratio is to rise further, it could bode well for this stock."