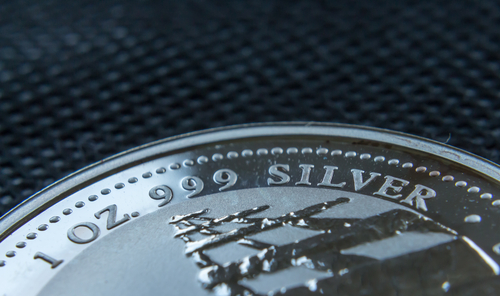 (Kitco News) - Silver is accelerating its move higher as it plays catch-up with gold due to increased trade uncertainty, Brexit and global growth worries, factors that are all pushing precious metals higher, according to analysts.

The move in silver is driven by gold, said analysts as they reminded investors that the metal is usually much more volatile than gold.

“Silver is catching up here. It is getting a bid from gold. The U.S. dollar fell a bit. Rates again dropped significantly, and equity markets went into flux. Essentially what it meant to us is that we will get our $19-$20 silver target quicker,” TD Securities head of global strategy Bart Melek told Kitco News. “You would expect silver to outperform gold given the fact that it has double the volatility of gold.”

The gold-silver ratio moved from the July’s disappointing level of 93 to 81 on Tuesday and Melek said he wouldn’t be surprised to see that number fall down below 80.

From a historical perspective, silver always follows gold with the metal still remaining cheap even at these levels. “We had a significant period of time where gold was not doing great and silver did even worse. We’ve hit a peak underperformance in July when the ratio was at 93.3. Now it is very much catch-up,” added Melek.

Tuesday’s impressive move up was largely driven by weak manufacturing numbers out of the U.S., which revealed that the sector has contracted for the first time since 2016, said Rhona O'Connell, head of market analysis for EMEA and Asia regions at INTL FCStone.

The data showed that the ISM manufacturing index came in at 49.1% last month, missing market expectations of 51.1%.

O’Connell described silver’s price action as a “typical move” and added that silver is usually more extreme than gold.

“It is partly because it’s got the lower price and therefore is more accessible to more people. When the gold and silver are moving like this, you tend to find that silver moves further and faster and partly becomes a self-fulfilling argument,” O’Connell explained.

What's next for silver?

Gold has further room to grow, which means that silver is also heading higher, according to RJO Futures senior market strategist Phillip Streible.

If gold can take out $1,550-60, then it is definitely heading to $1,600, Streible noted. “The gold-silver ratio has taken a dramatic turn lower. A more normalized level for the gold-silver ratio is in the 60s. Silver can easily achieve $25 by Thanksgiving.”

The only thing that could disappoint the precious metals market is the Federal Reserve, which is scheduled to announce its rate decision on September 18, the strategist added.

"The trade talks are going nowhere and it seems like the U.K. Brexit negotiations are falling apart,” Streible said.

Melek is not ruling out higher gold and silver prices either, stating that his gold target is $1,585. “Not sure if silver could breach $20. But, depending on how much momentum there is in this market, it could very well happen. Ultimately silver is positioned quite well for a better time,” Melek said.

Traders should continue to keep a close eye on the U.S. and global economies as well as the U.S. dollar and interest rate environment, the TD’s strategist added.