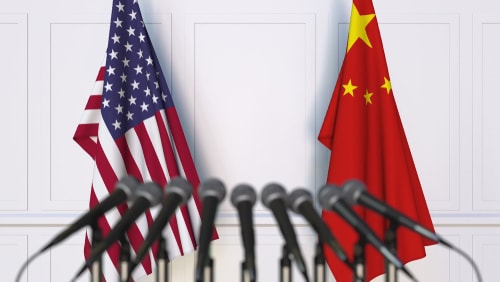 (Kitco News) - Gold is unlikely to see fresh multi-year highs in September unless the U.S.-China trade talks fail or civil unrest in Hong Kong escalates and China gets involved, according to INTL FCStone.

After rallying in August, gold’s next month will likely be one of consolidation and range-bound trading, INTL FCStone independent commodity consultant Edward Meir said in a September report.

“For the month as a whole, we see prices trading between $1,460–1,566,” Meir wrote on Monday. “We are looking for a period of more restrained consolidation.”

The gold rally, however, is far from over, added Meir, noting the Federal Reserve’s upcoming rate cut, U.S.-China talks uncertainty, and the Hong Kong unrest.

“Looking to September, with the Fed gearing up for another rate decrease, coupled with lingering uncertainties about the next round of U.S./Chinese trade talks, we do not think the gold rally is over just yet,” he wrote.

The driver that can take gold past its most recent six-year high of $1,566 is either derailment of the U.S.-China trade talks or China’s move into Hong Kong.

“We are wary about any overt Chinese move into Hong Kong or an unexpected derailment in the trade talks, each of which could send prices higher amid increased recessionary talk,” Meir highlighted.

It was the U.S.-China trade war rhetoric followed by new tariffs as well as Hong Kong unrest that were largely responsible for taking gold to six-year highs in August, the report noted.

Investors will be keeping a close eye on any U.S.-China trade developments, but negotiations are not likely to bring any meaningful results this fall, the report predicted.

“If the previous 13 round of negotiations are any guide, the October talks will again fall short of meaningful results. Markets will then want to see whether the two sides will retreat angrily to their respective corners or agree to continue talking,” Meir specified.

The biggest threat in all of this, which also acts as a gold positive, is the Hong Kong unrest getting entangled with the trade negotiations, the consultant explained.

“Last week, Hong Kong Chief Executive Carrie Lam formally withdrew a controversial extradition bill that initially triggered the protests, but this did little to pacify the opposition who are now pushing for even more concessions. Tensions boiled over again this weekend and although they were not on the size and scale that we have seen previously, this was mainly due to a heavy police presence, particularly at the airport --a prime target,” he said.

September will also see central banks around the world move rates lower, beginning with the European Central Bank announcement this week and the Federal Reserve’s meeting next week.

“We do not expect much change in the global macro landscape in September, as the downward to sideways grind will likely continue. This will prompt a number of leading and emerging market central banks to lower rates further and in fact, both the ECB and the Fed will move later this month.”

“There is now $17 trillion of sovereign debt that is in negative yielding territory, up $4 trillion in the past month alone. It is therefore becoming apparent, at least in Europe, that something new needs to be tried, which is why we are seeing talk of fiscal stimulus,” he said.