Boeing plane deliveries down 72% in August as MAX grounding weighs

(Reuters) - Boeing Co handed over around a quarter as many planes in August as it did a year ago, pushing total deliveries so far this year down more than 40%, as the worldwide grounding of its best-selling 737 MAX jet enters its seventh month.

Regular monthly numbers from the U.S. planemaker showed it delivered 18 aircraft in August, down from 64 in the same period, a year ago.

In the eight months through August, deliveries totaled 276 aircraft, compared with 481 last year.

Chicago-based Boeing has not delivered any of its 737 MAX aircraft since the single-aisle plane was grounded worldwide in March after two fatal crashes in Indonesia and Ethiopia.

U.S. airlines have removed the grounded jet from their flight schedules until December or early next year.

The planemaker has said it expects to receive certification from the Federal Aviation Administration by October to put the jets back in the air.

Boeing is still playing catch up with European rival Airbus SE, which remains ahead with combined deliveries of 500 aircraft for the first eight months of 2019. Airbus delivered 207 of its A320neo jets, which competes with the 737 MAX.

Net orders after cancellations were a negative 85 aircraft so far this year for Boeing, compared with 95 for Airbus. 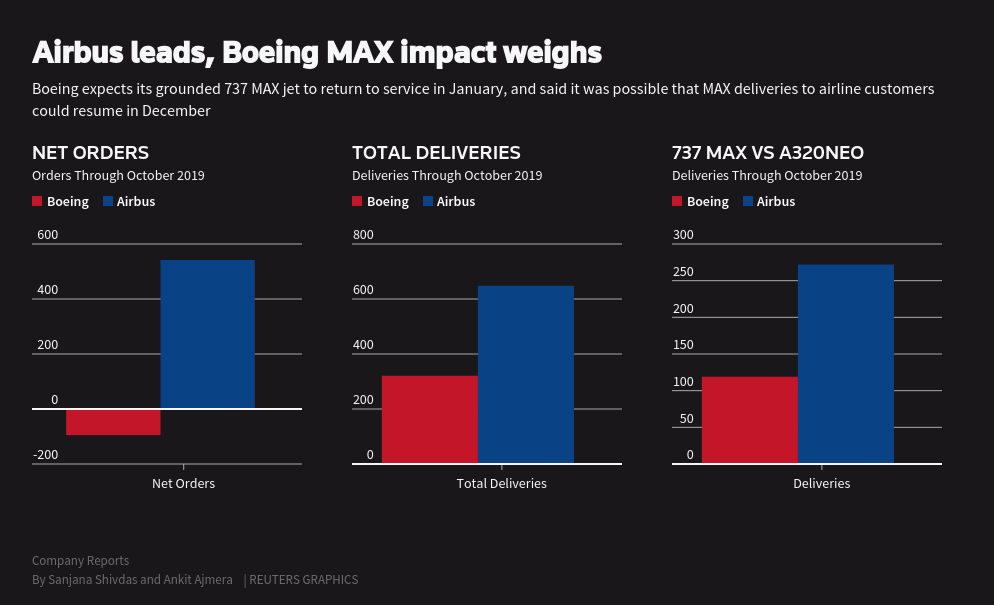 Reporting by Sanjana Shivdas in Bengaluru; editing by Patrick Graham and Saumyadeb Chakrabarty