NEW YORK (Reuters) - A gauge of world stock markets fell for the first time in five sessions and bond yields rose on Tuesday, as uncertainty grew over the mix of stimulus the European Central Bank will add to boost a slumping economy this week amid fresh signs global growth was slowing.

The bond moves come as market participants look towards Thursday’s ECB meeting, which is widely expected to deliver a cut to interest rates and point to further bond-buying stimulus.

However, concern has been mounting that ECB policymakers and other global central banks are nearing the limits of stimulus policies, especially those with negative interest rates and sub-zero long-term sovereign bond yields.

“The real fulcrum event is the ECB meeting and that will drive Bunds, which in turn, have had a massive influence on Treasuries over the course of the last eight weeks or so,” said Guy LeBas, chief fixed income strategist at Janney Montgomery Scott in Philadelphia. 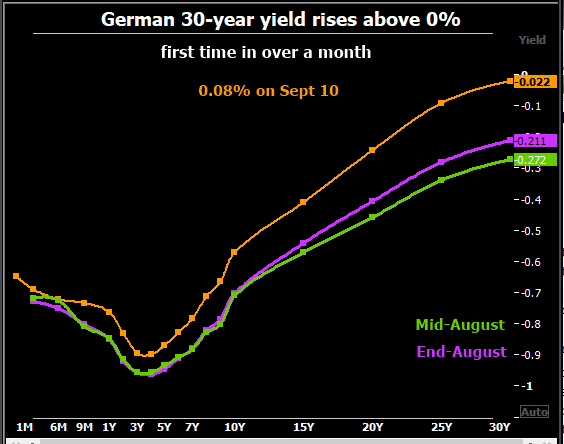 The U.S. Federal Reserve is also widely expected to cut interest rates next week as policymakers attempt to protect the global economy from risks, such as Britain’s exit from the European Union.

On Wall Street, stocks were lower, weighed down in part by technology .SPLRCT shares as data from China showing producer prices had their sharpest pace of declines in three years in August renewed global recession worries.

European shares edged higher, as the rise in bond yields helped boost bank shares .SX7P by more than 2%, putting them on track for a fifth day of gains. The bank index is up nearly 9% over that span, its best five-day performance since April 2017.

Germany’s DAX rose after Finance Minister Olaf Scholz said the country was ready to inject “many, many billions of euros” into the economy to counter any economic downturn.

The export-heavy German index was also aided by a Reuters report that Bank of Japan policymakers are now more open to discussing the possibility of expanding stimulus at their Sept. 18-19 board meeting due to the broadening fallout of the U.S.-China trade war.

In currencies, the dollar strengthened but held in a tight range ahead of the ECB meeting, while sterling steadied as investors looked for clarity on the Brexit situation as several British lawmakers launched a new group on Tuesday to bolster efforts to secure a deal to leave the European Union.