Oil up 1.5% on expectations of extended OPEC output cuts

NEW YORK (Reuters) - Oil futures climbed to the highest in almost six weeks on Tuesday on expectations the Organization of the Petroleum Exporting Countries and its allies will agree to extend crude output cuts to support prices.

Brent reached its highest level since Aug. 1, while U.S. crude rose to its highest since July 31.

Prince Abdulaziz bin Salman, Saudi Arabia’s new energy minister and a longtime member of the Saudi delegation to OPEC, said the kingdom’s policy would not change and a global deal to cut oil production by 1.2 million barrels per day would be maintained.

He added that the so-called OPEC+ alliance, which includes non-OPEC producers such as Russia, would be in place for the long term.

“The oil markets have been rallying as the Saudis have appointed a new oil minister who has committed to maintain the existing policy to get the market in balance and ultimately see higher prices,” said Andy Lipow, president of Lipow Oil Associates in Houston.

The OPEC+ joint ministerial monitoring committee (JMMC), which reports on compliance with the cuts, is due to meet on Thursday in Abu Dhabi.

There have been concerns about producers’ adherence to the agreement as OPEC members Iraq and Nigeria, among others, exceeded their quota in August and Russia also did not fully comply.

“Markets will need to see concrete progress on the production front, even as the world’s economy slows, to sustain gains,” said Jeffrey Halley, senior market analyst at OANDA.

If oil markets close higher on Tuesday, it will be the longest run of gains since late July. Headwinds, however, remain due to U.S.-China trade tensions.

“Our oil supply-demand outlook for 2020 calls for additional OPEC production cuts to keep inventories near normal,” Goldman analysts wrote in a note.

In the United States, crude stockpiles are likely to have fallen for a fourth consecutive week last week, a preliminary Reuters poll showed on Monday.

Five analysts polled by Reuters estimated, on average, that crude inventories fell 2.6 million barrels in the week to Sept 6. 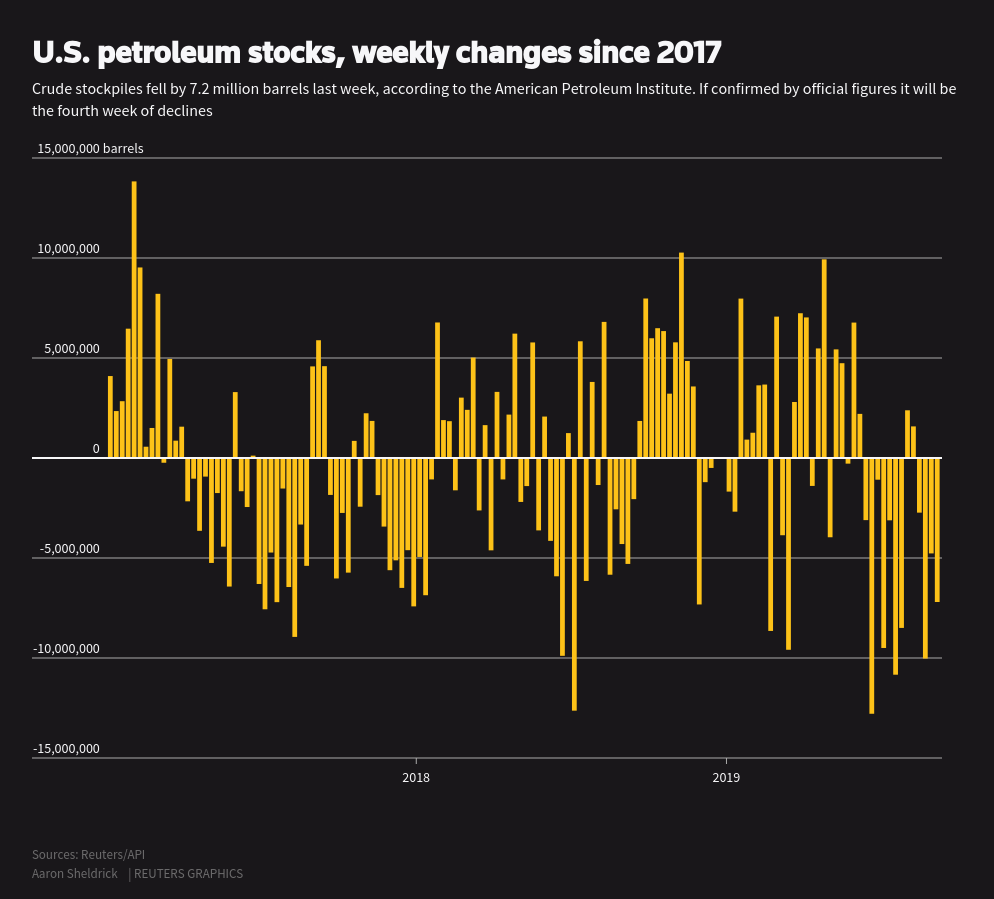