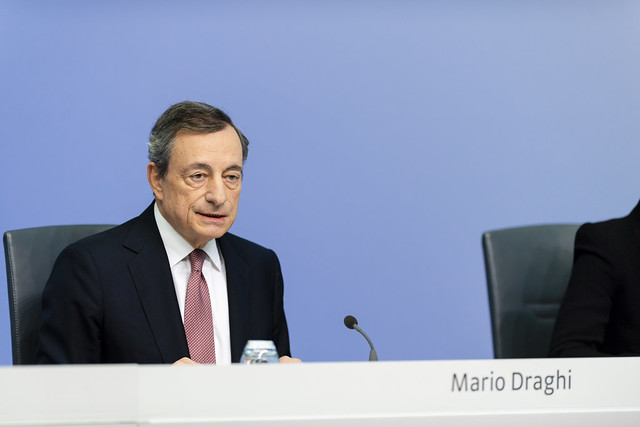 (Kitco News) -For years the European Central Bank has said that it is ready and will to do what is necessary to support its inflation target.

"And today we did it," said the central bank's President Mario Draghi.

In his press conference following the ECB's monetary policy meeting, Draghi said that there was a clear consensus from the governing council on the need to act. He added that the inflation and economic outlook in the Eurozone had deteriorated more than expected.

The comments come after the central bank announced several dovish monetary policy actions, lowering the interest rate on the deposit facility by 10 basis points to -0.50% and restarting a €20 billion monthly asset-purchase program.

"Today's decisions were taken in response to the continued shortfall of inflation with respect to our aim. In fact, incoming information since the last Governing Council meeting indicates a more protracted weakness of the euro area economy, the persistence of prominent downside risks and muted inflationary pressures," Draghi said in his opening statement.

"This slowdown in growth mainly reflects the prevailing weakness of international trade in an environment of prolonged global uncertainties, which are particularly affecting the euro area manufacturing sector," Draghi said.

As to how long the ECB is looking to maintain these new easing measures, Draghi said that they still have "a lot of headroom to go on for a long time."

While the ECB is committed to doing whatever it takes to meet its inflation target, Draghi said that it is also time for governments to do what they can.

"In view of the weakening economic outlook and the continued prominence of downside risks, governments with fiscal space should act in an effective and timely manner," he said. "All countries should reinforce their efforts to achieve a more growth-friendly composition of public finances."

Gold prices jumped significantly higher in reaction to what some economists described as a monetary policy bazooka. The gold market is rallying in the face of renewed strength in the U.S. dollar, as the euro as dropped following the ECB's latest monetary policy decision.

Market analysts have noted that gold has room to move higher against a stronger U.S. dollar as investors are paying more attention to global bond yields. The latest ECB decision will put pressure on the Federal Reserve to lower interest rates when it meets next week.

At the same time market analysts have noted that international investors will continue to jump into U.S. Treasuries because they still offer positive nominal yields.

Wednesday in a report, Colin Hamilton, precious metals analyst at Bank of Montreal, raised his gold prices forecast through 2022. He added that he sees gold prices pushing higher as central banks are "falling over each other to ease," monetary policy.