LONDON (Reuters) - German bond yields and the euro rebounded on Thursday and European banking shares were whipsawed as doubts crept in about the effectiveness of the ECB’s decision to cut interest rates and pledge an indefinite supply of asset purchases.

The ECB cut its deposit rate by 10 basis points to a record low of -0.5%, promised that rates would stay low for longer and said it would restart bond purchases at a rate of 20 billion euros a month from Nov. 1.

It also eased the terms of its long-term loan facility to banks and said it would introduce a multi-tier deposit rate facility to help them.

The package of measures initially cheered investors whose expectations for aggressive easing had recently been dented by some ECB policymakers’ comments.

Italy’s 10-year bond yield fell to a record low at 0.76%, pushing the gap over German peers to 136 basis points — its tightest since May 2018 while German long-dated bonds saw yields tumble as much as 11 basis points on the day.

But over the course of Mario Draghi’s press conference, German borrowing costs crept higher while the euro rose off lows

“It was a big package but in the press conference, there was a bit of realization that monetary policy is running into limitations,” said Rainer Guntermann, a rates strategist at Commerzbank in Frankfurt

“Draghi stressed the need for fiscal spending, maybe that has taken the market down a bit.”

Analysts said the euro’s rise came after Draghi told reporters there had been no discussion about raising bond issuer limits within the asset purchase program. That introduced doubts over how long the QE program could last, while his repeated calls for fiscal stimulus also supported the single currency, they said.

“The price action confirms that the markets worry that the ECB is certainly running out of options,” said Valentin Marinov, Head of G10 FX strategy at Credit Agricole.

“The announced easing package looks like another compromise between the doves and hawks at the Governing Council. There might be some upside risks for the euro from here.” 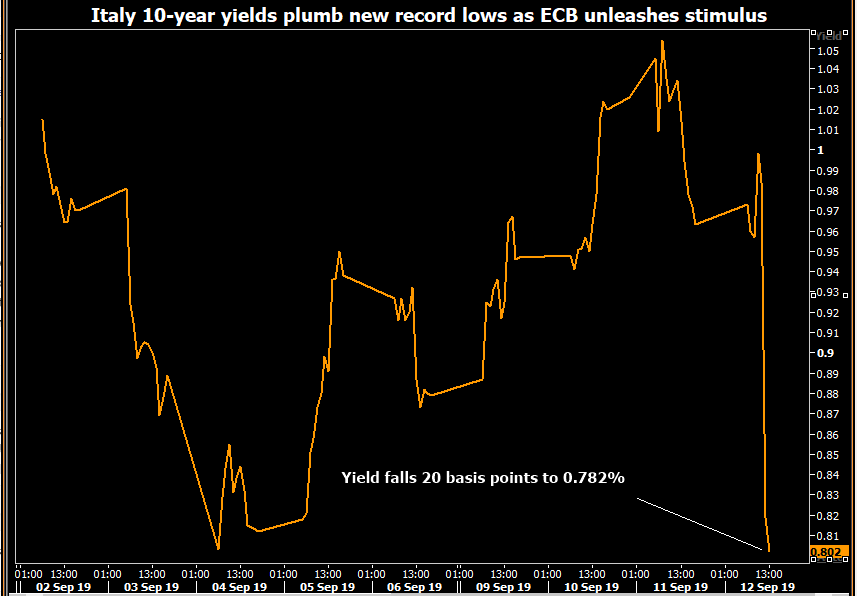 Euro zone stocks had a volatile session. After a brief jump following the ECB announcement, the market then fell into the red, only to recover some ground to trade 0.3% higher..

Investors trained their sights on euro zone bank shares, given the negative impact of sub-zero interest rates on lenders’ profits. An index of bank shares first jumped 1.6%, then fell back by a similar amount before clawing back those losses.

“Today’s release in our view has some marginal positives but is far from a panacea for banks’ profitability,” Morgan Stanley analysts told clients.

However, an index used by investors to gauge credit risk on European financial debt including bank bonds — the iTraxx Europe Senior Financials index — dropped as much as 7 bps on the day, according to Tradeweb data.

The prospect of QE and the measures to help banks also bolstered sentiment on peripheral markets, especially Italy and Spain where 10-year borrowing costs slipped 5-10 bps. 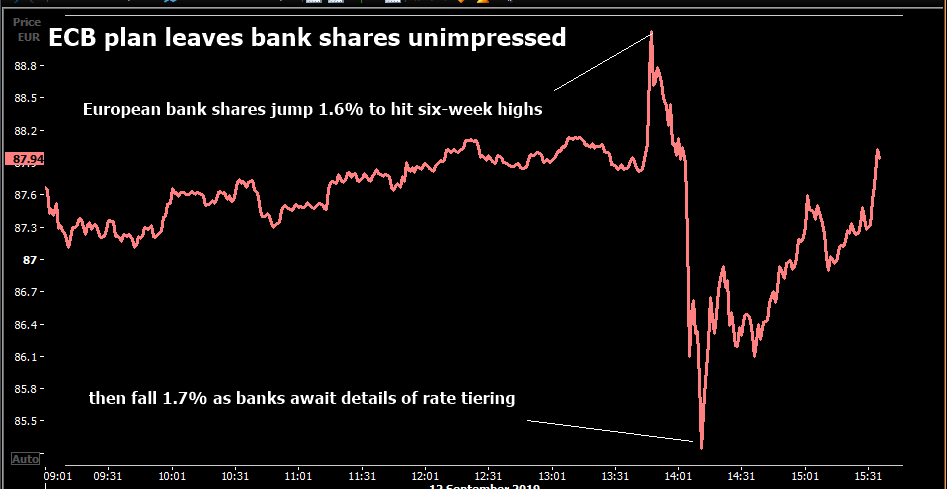 One positive for the ECB was the uptick in inflation expectations following its policy announcement.

A key market gauge of long-term inflation expectations shot up to 1.32%, their highest level since late-July, as the ECB’s policy action boosted confidence in the central bank’s ability to lift inflation.

“The main point to take away is that QE is here to stay and the ECB has joined the Bank of Japan in having an open-ended program,” said Salman Ahmed, chief investment strategist at Lombard Odier Investment Managers.

“Effectively Mr Draghi has sent a signal: ‘as long as it takes’”.