Take Five: Of Fed-aches and other central banks

Investors around the globe are bracing for a second rate cut from the U.S. Federal Reserve at its policy-setting Federal Open Market Committee on Sept. 17-18.

Fed Chair Jerome Powell recently said that the central bank remained committed to keeping the U.S. economic expansion going, signaling he and his colleagues are likely to cut interest rates into 2020. But even so, President Donald Trump has made life a little harder for Powell.

Trump again lambasted the Fed following an European Central Bank rate cut Thursday that sent the euro lower, tweeting the ECB was “succeeding” in “depreciating the Euro against the VERY strong Dollar, hurting U.S. exports” while the Fed “sits, and sits, and sits.”

Powell acknowledged “a range of views” among policymakers; his careful wording reflects a split within the U.S. central bank about how best to respond to an economy where the job market and consumer spending are holding up but trade tensions between Beijing and Washington, Britain’s possibly messy exit from the European Union, and a broad global slowdown pose risks.

The Fed cut rates for the first time in more than a decade in July. Market pricing suggests that investors expect another quarter-point reduction next week.

-WRAPUP 1-With Fed sure to cut rates, Powell on hook to flag next steps 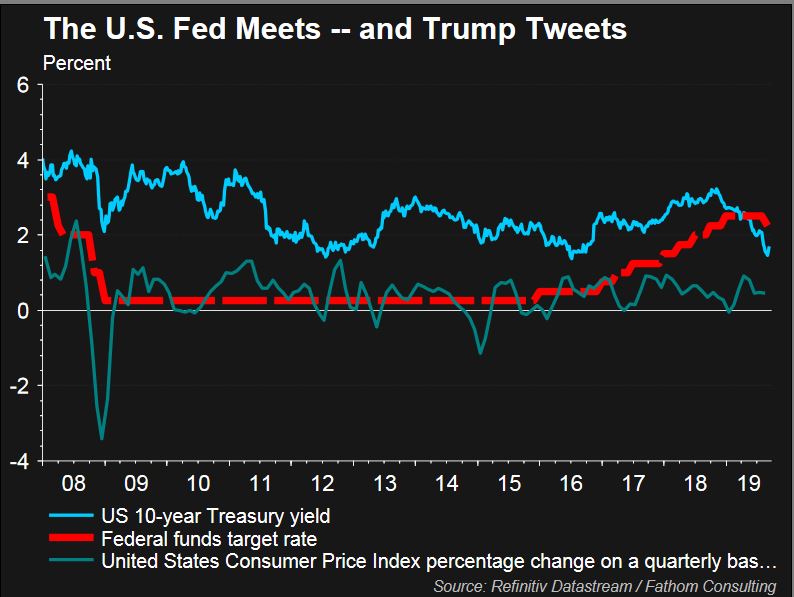 After the European Central Bank’s bazooka, the wait is on to see what the message is from other central banks. The Fed of course will cut rates by a quarter point on Wednesday. But Thursday brings policy meetings in Japan, Britain, Norway and Switzerland.

The Bank of Japan, sources say, will discuss further easing; it may even decide to act to head off further economic pain, a third of analysts in a Reuters poll predict. Upcoming trade and inflation data should show Japan’s export slump deepening and inflation at two-year lows. But its dilemma is the same as elsewhere: How to inject stimulus without hurting banks any further, and how to make it effective.

Switzerland, with a -0.75% interest rate, is quiet so far on the prospect of emulating ECB easing but will be concerned at the franc’s surge to two-year highs versus the euro. On the other hand, the relentless rise in SNB “sight deposits” is hardly tenable: These are at almost 600 billion francs as the SNB intervenes to tamp down the franc.

Brexit clouds the Bank of England’s strategy but Norway, one of very few central banks still pressing on with rate rises, could hike again on Sept. 19. But with easing gathering steam all around, it is very likely to mark the end of its tightening cycle.

There is excitement also in emerging markets, where Brazil is expected to cut 50 bps on Wednesday. South Africa’s central bank also meets on Thursday, though is not expected to move. But these days, you never know. 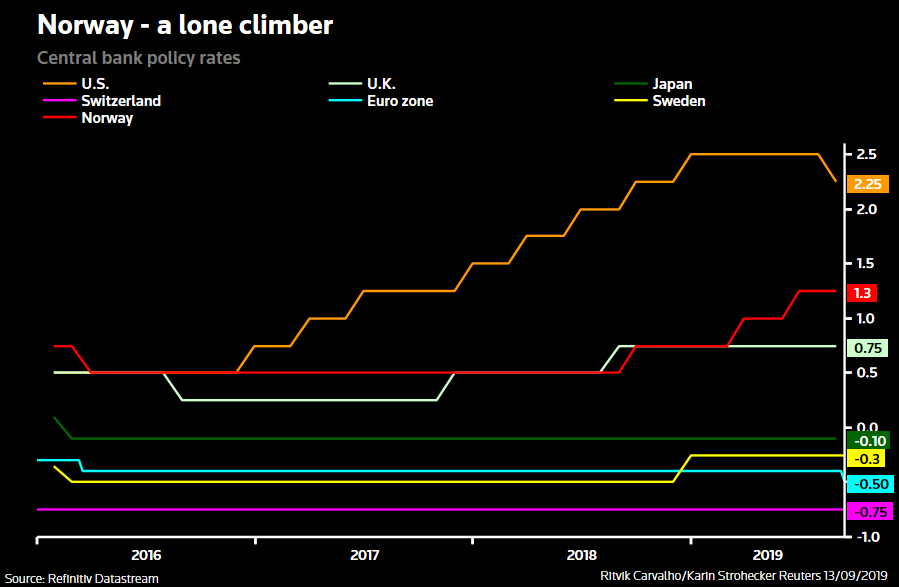 Financial markets were quick to seize on recent conciliatory messages and measures between Beijing and Washington as a hopeful sign of an imminent deal in the protracted trade war. Yet that may be as much a symptom of fatigue from the unremitting tweets and retorts, as genuine optimism.

A Reuters poll of 60 economists shows 80% of them expect relations between Beijing and the Trump administration to deteriorate or at best hold steady until end-2020.

Meanwhile, the IMF has issued dire warnings of a drop in global economic growth next year. China’s neighbors are seeing growth rates slide as their exports to the mainland collapse.

Some are looking for upsides: Vietnam has been a beneficiary of businesses seeking to move or alter trade routes. Thailand just announced a package of tax incentives, investment zones and new legislation that would draw in companies from China, Japan, Taiwan and South Korea. But if tensions are shrinking the world trade pie, any feasting in Southeast Asia may be short-lived. 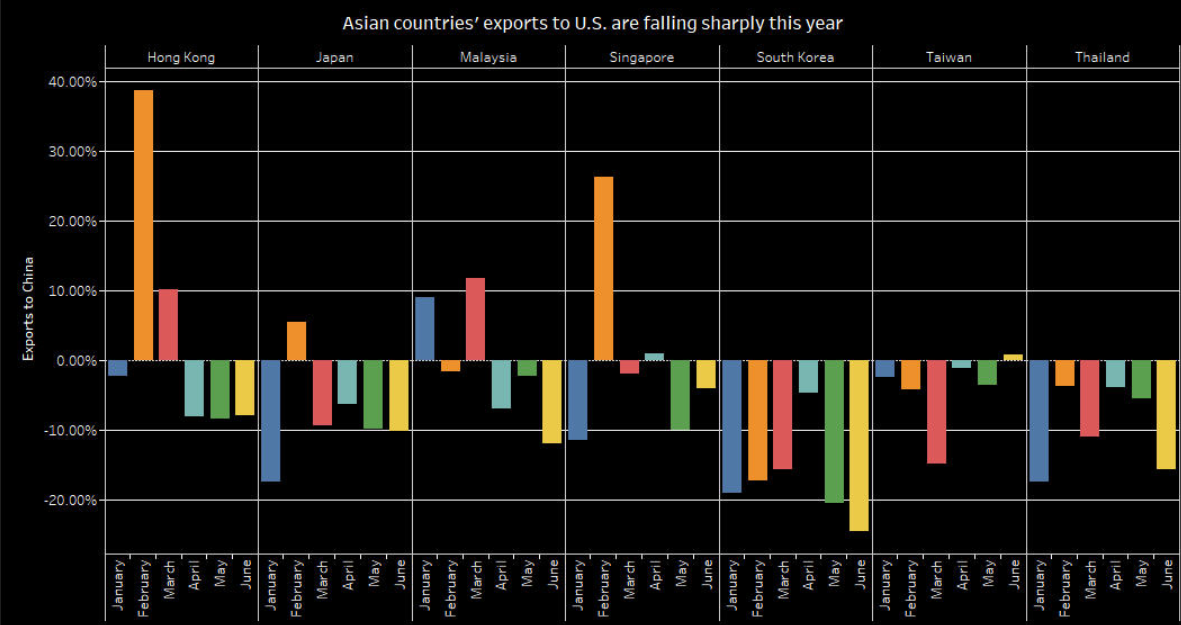 Prime Minister Boris Johnson will challenge a ruling of Scotland’s highest court of appeal that his decision to suspend, or prorogue, parliament for five weeks was unlawful and should be annulled. Gina Miller will appeal a rejection of her challenge for a judicial review of Johnson’s decision to prorogue parliament. Both cases are scheduled to be heard by U.K.’s Supreme Court on Tuesday.

Proroguing parliament until Oct. 14 was seen by most as a tactical move from Johnson to make sure he maintains a strong negotiating hand with Brussels.

Johnson wanted to show he can deliver a no-deal Brexit on Oct. 31. Most investors believed him, sending the pound sharply lower at the start of the month, to levels not seen since 1985 in early September.

But the tables seem to have turned for now: Parliament managed to pass a law that forces Johnson to extend Brexit if a deal isn’t reached by Oct. 19. Traders say this has definitely reduced the probability of a no-deal Brexit on Oct. 31, though the risks of a no-deal Brexit down the road was still high. 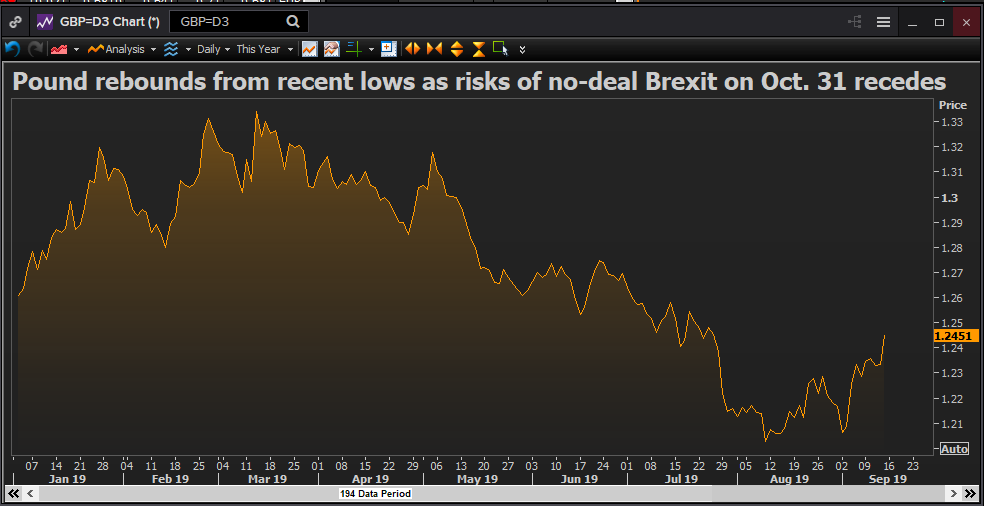 If the Fed goes big with its rate cut on Wednesday the place to be will probably be the riskier parts of the world that still have interest rates you can see with the naked eye.

Low rates in the United States and sub-zero ones in core Europe and Japan mean high-yield bonds from places like Turkey, Ukraine, Ecuador, Egypt, Brazil or parts of sub-Saharan Africa look ever more attractive.

There is a catch-up factor in play too. August was a torrid month for these countries’ assets. Argentina’s slump into crisis made it worse of course, but the underperformance between high-yield emerging market sovereign debt and that the safer ‘investment grade’ (IG) emerging market countries, was one of the most severe ever - roughly -3% returns versus +3% for IG emerging markets debt.

Turkey’s jumbo rate cut this week helped speed that catch up process but a dove-bomb from the Fed on Wednesday as well as a big chop from Brazil and more soothing trade war sounds will all help it along nicely. 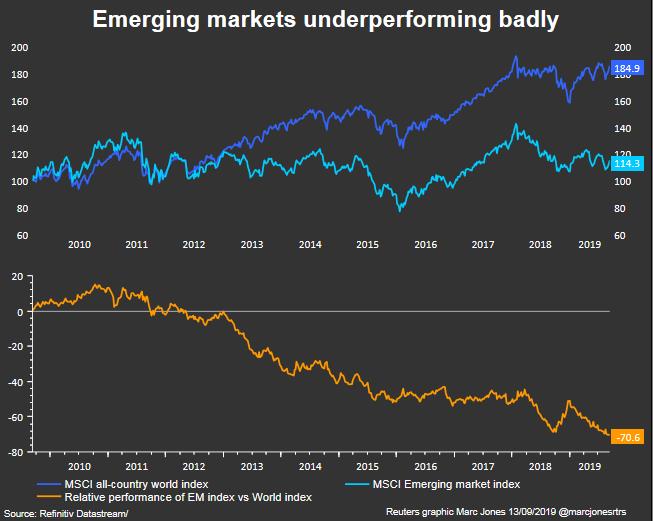