The Fed should enact a “big interest rate drop, stimulus,” at its meeting this week, which ends Wednesday, Trump said on Twitter on Monday.

However historical precedent and the United States’ changing energy diet suggest the Fed is likely to stick with an expected quarter of a point interest rate cut and go no further.

The Fed has responded to past crisis events including the September 2001 terrorist attacks and the Black Friday market collapse in the 1980s. But it acted then to address trouble in financial markets that risked creating broader problems.

Crises can cause banks and other financial firms to become wary of lending, for example, and make cash less available throughout the economy. In the months after the 2001 attacks, for example, the Fed lowered rates 1.75 percentage points, and took measures to make sure banks had liquidity and could continue clearing checks.

The full impact of the Saudi bombings may not be immediately clear. It will depend on both how quickly the Saudi facility resumes full production, and whether the attack leads to a broader conflict in the region.

The market reaction, however, has been muted so far, with no sign of the sort of strains that would require central bank reassurance.

Investors apparently see little reason to change their bets that the Fed would cut rates this week by a quarter of a percentage point only.

GRAPHIC: Oil shock may not shock the Fed - here 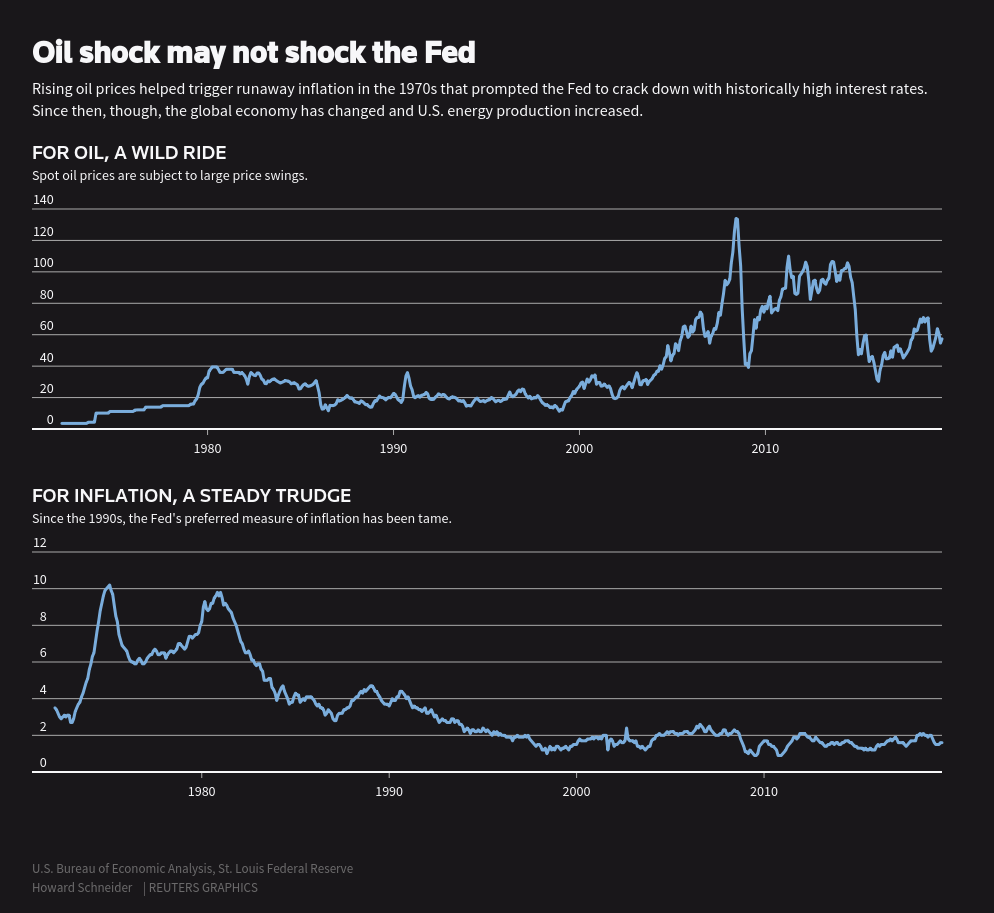 When oil price shocks hit the United States after an embargo by Arab exporters and the Iranian revolution in the 1970s, the Fed did exactly the opposite of what Trump is suggesting. Officials raised interest rates to a record high, taming inflation, but at the cost of a deep recession.

The Fed’s current attitude about oil price shocks is to treat them as of passing importance - no longer likely to move inflation in any enduring sense, and with a more mixed impact on economic growth because the United States produces so much energy of its own now.

Rising energy efficiency and the increasing dominance of the service sector in the United States has weakened the link between U.S. inflation and oil prices. The machines that make stuff use less energy to do so, and more of the U.S. economy revolves around activities that are less energy-intensive, from computer coding to home health care.

In addition, while consumers and some companies may lose out if prices increase, energy firms will likely provide an offsetting economic boost by investing more in drilling and production in the United States and hire more oil field workers.