NEW YORK (Reuters) - Not all U.S. rate-cutting cycles are created equal, at least when it comes to how the stock market reacts.

The Federal Reserve is expected to lower interest rates when it issues its policy statement on Wednesday at the close of a two-day meeting. It would be the central bank’s second reduction this year, on the heels of a 25 basis point cut at the July policy meeting, the first rate cut since 2008.

As recently as last week, markets were pricing in a greater than 90% probability that the Fed will shave another quarter point from its overnight lending rate, which is currently set in a range of 2.00% to 2.25%.

Based on past performance of the stock market following a rate cut, at issue for the market’s performance could be how dire the economy is now and how successful the Fed will appear to have been in staving off a downturn.

Of the past eight easing cycles since 1981, four have been identified as “insurance” cycles, when problems loomed but the economy was not in a recession, while four occurred when the economy was entering, or already in, recession, according to research from Allianz Global Investors.

After a year, the benchmark S&P 500 .SPX rose an average of 20.4% during insurance cycles, while the index fell an average of 10.2% during pre-recession cycles, according to Allianz. 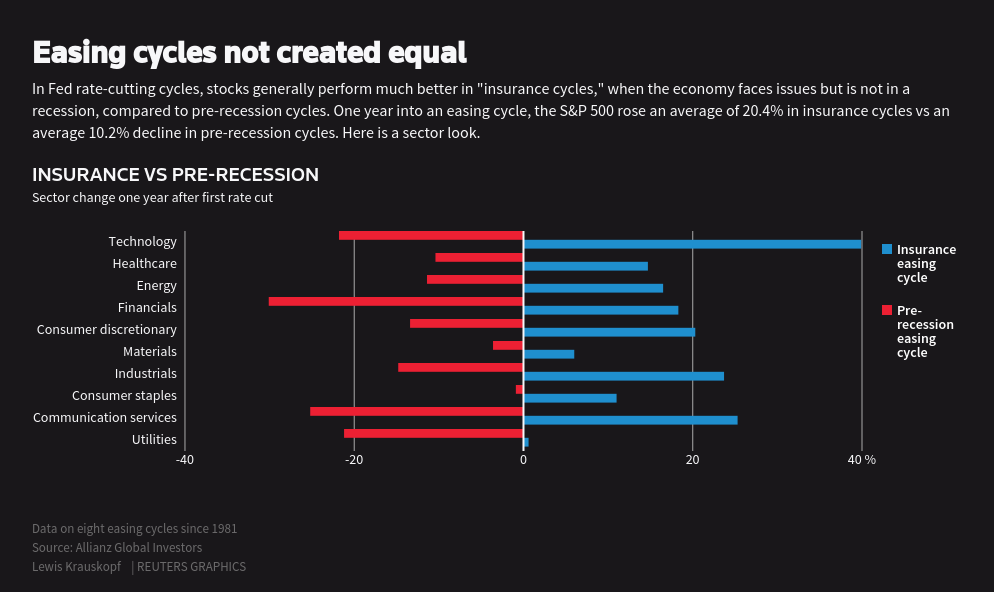 Another distinction in easing cycles: Smaller-cap stocks tend to outperform large caps, according to Jefferies research. Small-cap stocks have climbed 28% overall in the 12 months following the first rate cut, compared to 15% for large caps, the firm said.

Smaller companies are perceived to be more leveraged to the state of the U.S. economy and have higher debt loads or weaker balance sheets, according to Jefferies equity strategist Steven DeSanctis, and lower rates are expected to improve both situations. 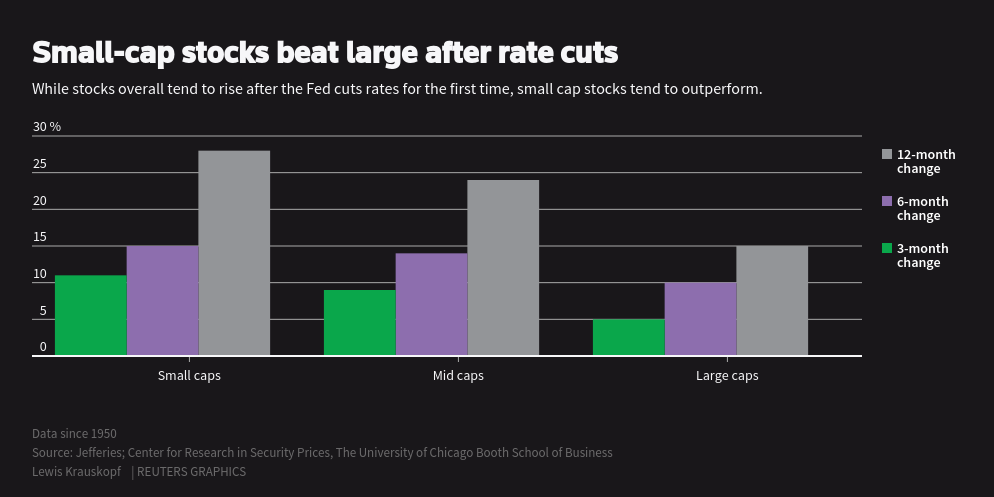 Following a second rate cut in a cycle, which Wednesday's would be, the Dow Jones Industrial Average .DJI has gained an average of 20.3% one year later, according to Ned Davis Research.

“Perhaps because the second cut demonstrates the Fed’s commitment, or perhaps because the liquidity from the first cut had begun to work through the system, the gains have been immediate, with an average jump of 9.7% three months after the second cut,” Ed Clissold, chief U.S. strategist at Ned Davis Research, said in a recent report. 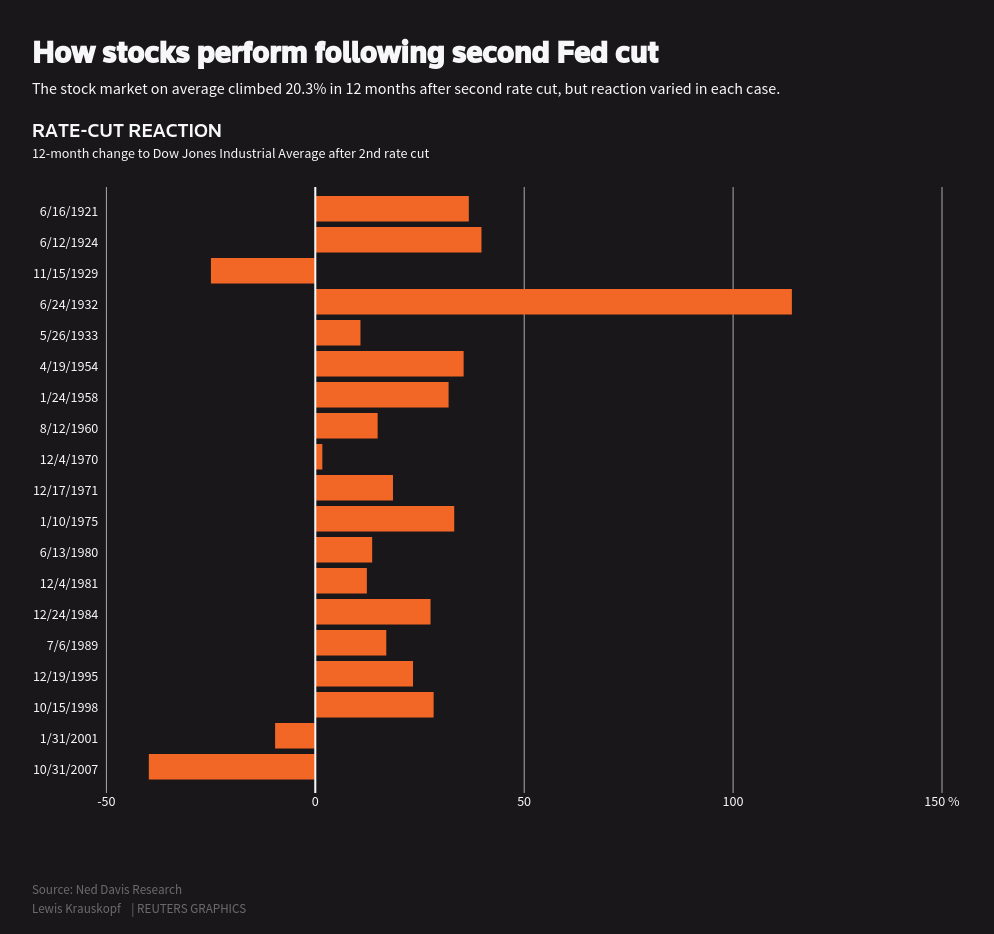 That the Fed seems to be poised for a 25 basis point cut, as opposed to a larger cut of 50 basis points, could spell better news for stocks.

Over the past 40 years, when the first two cuts in an easing cycle have been only 25 basis points, the S&P 500 has always been higher six and 12 months later, according to Ryan Detrick, senior market analyst at LPL Financial. Returns are more mixed when one of the cuts has been 50 basis points.

“History would suggest bulls should be rooting for a 25 basis point cut this week, as these are more viewed as ‘insurance cuts’ versus a 50 basis point cut, which could mean the Fed sees real trouble down the road,” Detrick said. 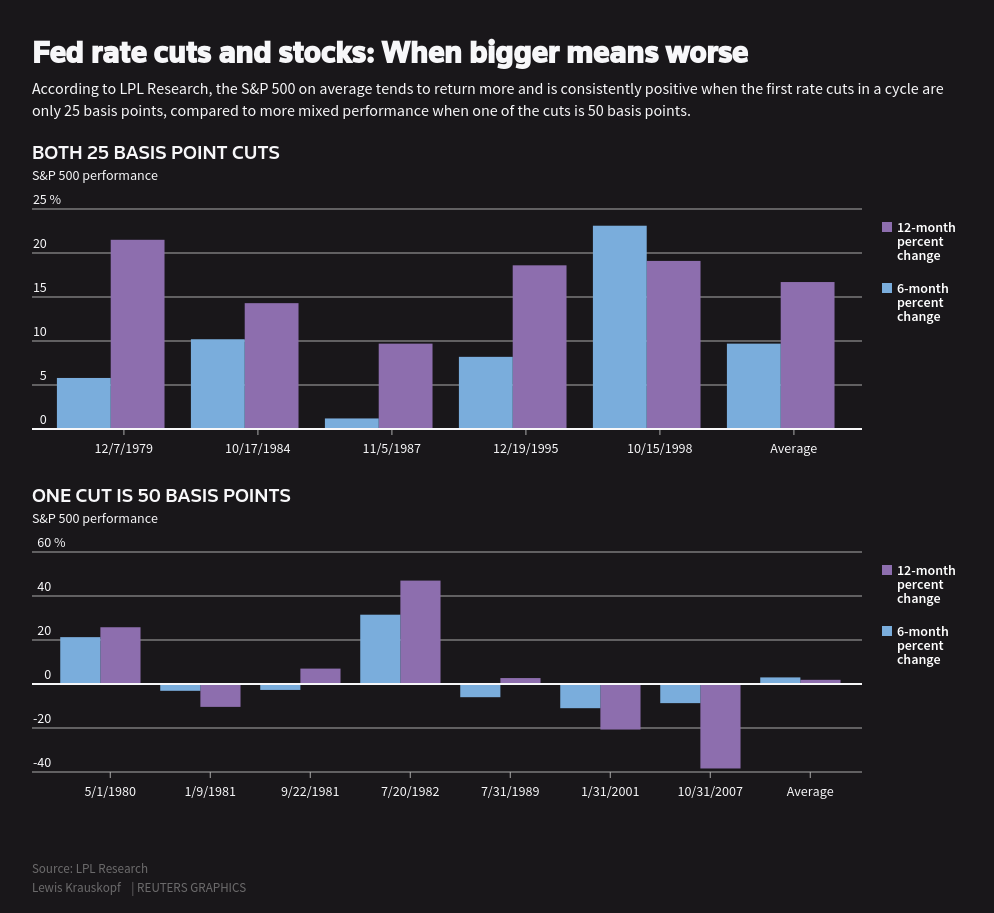