LONDON (Reuters) - The dollar held near a seven-week high against the Japanese yen on Wednesday before the outcome of a Federal Reserve meeting where officials are widely expected to cut interest rates by a quarter of a percentage point.

With recent economic data proving to be strong — a Citigroup U.S. economic surprise index .CESIUS is holding at its highest levels this year — some market participants are buying the dollar in case the Fed signals a more confident view.

“All in, we think the meeting outcome risks disappointing market expectations, which are perhaps leaning toward a more dovish outcome, resulting in a renewed bid for the dollar,” Scotiabank strategists said.

The dollar has been driven more by trade tensions between Washington and Beijing this year than by U.S. monetary policy. The dollar has gained nearly 1% against the yen since the last rate cut in July.

Morgan Stanley strategists believe that any dollar upside is likely to be capped, because market expectations are not overly dovish and a trade deal between the United States and China seems likely.

A retreat in global oil prices also restored some calm to markets. Oil prices fell in Asia, extending Tuesday’s 6% decline, after Saudi Arabia’s energy minister said the kingdom had tapped stockpiles to restore oil supplies to where they stood before weekend attacks shut around 5% of global output.

After the Fed releases its policy decision, attention will turn to the Bank of Japan’s meeting ending on Thursday, to see whether it eases policy, too.

Deepening negative rates will be an option if the BOJ eases, although the central bank may accompany that with measures to mitigate the pain on financial institutions, sources have told Reuters. 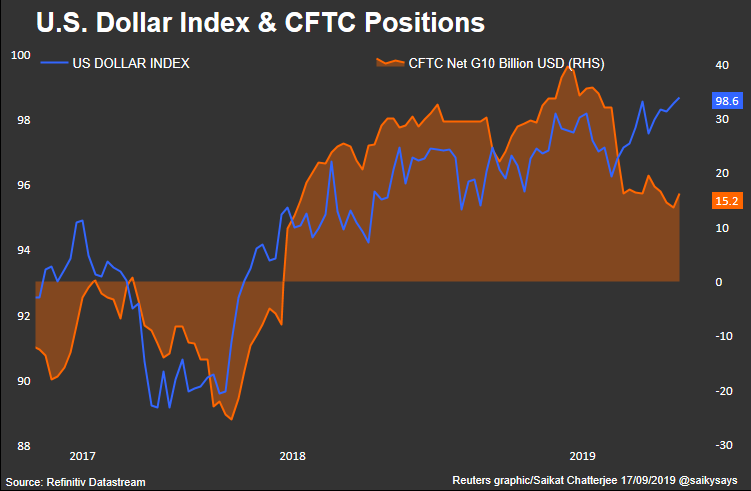