Explainer: The Fed has a repo problem. What's that?

(Reuters) - As if the U.S. Federal Reserve didn’t already have enough on its plate heading into its meeting on interest rates this week, chaos deep inside the plumbing of the U.S. financial system has thrown policymakers an unexpected curveball.

Cash available to banks for their short-term funding needs all but dried up on Monday and Tuesday, and interest rates in U.S. money markets shot up to as high as 10% for some overnight loans, more than four times the Fed’s rate.

That forced the Fed to make an emergency injection of more than $50 billion, its first since the financial crisis more than a decade ago, to prevent borrowing costs from spiraling even higher. It will conduct another one on Wednesday.

The exact cause of the squeeze is a matter of some debate, but most market participants agree that two coincidental events on Monday were at least partly to blame. First, corporations had to withdraw funds from money market accounts to pay for quarterly tax bills, and then on the same day the banks and investors who bought the $78 billion of U.S. Treasury notes and bonds sold by Uncle Sam last week had to settle up.

On top of that, the reserves that banks park with the Fed and are often made available to other banks on an overnight basis are at their lowest since 2011 thanks to the central bank’s culling of its vast portfolio of bonds over the past few years.

Added together, these factors are testing the limits of the $2.2 trillion repurchase agreement - or repo - market, a gray but essential component of the U.S. financial system.

Whatever the cause, the episode has added fuel to the argument that the Fed needs to take steps to avoid more disruptions in the repo market down the road. 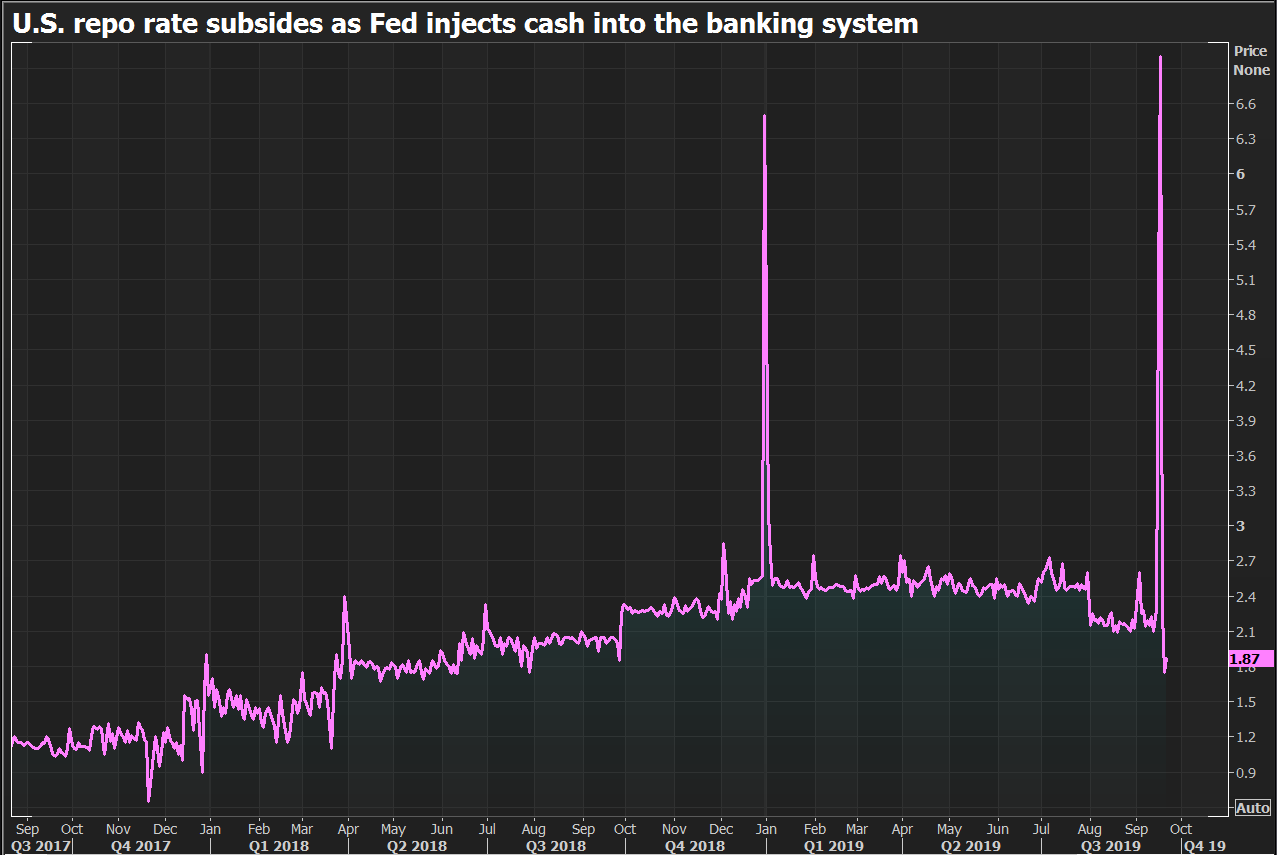 WHY IS THE REPO MARKET IMPORTANT?

The repo market underpins much of the U.S. financial system, helping to ensure banks have the liquidity to meet their daily operational needs and maintain sufficient reserves.

In a repo trade, Wall Street firms and banks offer U.S. Treasuries and other high-quality securities as collateral to raise cash, often overnight, to finance their trading and lending activities. The next day, borrowers repay their loans plus what is typically a nominal rate of interest and get their bonds back. In other words, they repurchase, or repo, the bonds.

The system typically hums along with the interest rate charged on repo deals hovering close to the Fed’s benchmark overnight rate, currently set in a range of 2.00% to 2.25%. That rate is expected to be cut by a quarter percentage point on Wednesday.

But sometimes, investors get fearful of lending, as seen during the global credit crisis, or at other times there are just not enough reserves or cash in the system to lend out, as appeared to be the case this week. And that can cause a squeeze on the market and send borrowing costs zooming higher.

But when investors get fearful of lending, as seen during the global credit crisis, or when there are just not enough reserves or cash in the system to lend out, it sends the repo rate soaring above the Fed Funds rate.

Trading in stocks and bonds can become difficult. It can also pinch lending to businesses and consumers and, if the disruption is prolonged, it can become a drag on a U.S. economy that relies heavily on the flow of credit.

WHAT HAS CAUSED THE DROP IN BANK RESERVES?

Coming out of the financial crisis, after the Fed cut interest rates to near zero and bought more than $3.5 trillion of bonds, banks built up massive reserves held at the Fed.

The Fed stopped raising interest rates last year and cut them in July and is expected to do so again on Wednesday. It has also now ceased allowing to bonds to roll off its balance sheet.

The question vexing policymakers now is whether those actions are enough to stop the downward drift in reserves, which are a main source of liquidity in funding markets like repo.

Bank reserves at the Fed last stood at $1.47 trillion, the lowest level since 2011 and nearly 50% below their peak from five years ago.

Through the Federal Reserve Bank of New York, the Fed can conduct occasional spot repo operations at times of funding stress, allowing banks and dealers to swap their Treasuries and other high-quality securities for cash at a minimal interest rate. It did this on Tuesday and will do it again on Wednesday.

2. LOWER THE INTEREST IT PAYS ON EXCESS RESERVES

By making it less profitable for banks, especially foreign ones, to leave their reserves at the Fed, it may encourage banks to lend to each other in money markets.

Such a permanent financing program will allow eligible participants to exchange their bonds for cash at a set interest rate.

Fed and its staff have considered such a facility, but they have not determined who qualifies, what would be the level of interest paid and the timing for a possible launch.

4. RAMP UP BUYING OF TREASURIES

The Fed can replenish the level of bank reserves by slightly increasing its holdings of U.S. government debt. This comes with the risk that it may be perceived as a resurrection of quantitative easing rather than a technical adjustment.