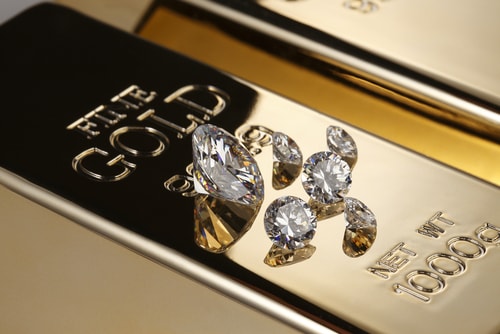 (Kitco News) - Citigroup’s bullish scenario that gold could rise to $2,000 in just two years would be bad for the diamond market, according to one of the bank’s analysts.

At the end of August, Citigroup published a research note stating that the ratio between gold and the S&P 500 is testing a critical pivot point and a break higher could trigger a rally that pushes gold prices 25% higher.

“Equity markets continue to look vulnerable, especially given the deeper inversion of the U.S. yield curve,” wrote Shyam Devani, senior technical strategist at the bank. “Sometimes the ratio between asset classes is too hot, sometimes too cold, but sometimes the chart signals ‘just right’.”

For this outlook to come to fruition, markets would have to see a heightened risk of global recession, sustained geopolitical tensions, and the Federal Reserve interest rate near zero.

All of the above will weigh on the overall diamond demand, Citigroup analyst Barry Ehrlich wrote earlier in September.

“A healthy diamond market requires a healthy U.S. (and China, India) middle-class consumer,” Ehrlich said while describing diamonds as an inferior store of wealth when compared to gold.

Diamonds are not likely to see increased demand amid investors’ rush to safety, he added. On top of that, when gold prices rise significantly recycling becomes more popular and diamonds follow the same path.

“Along with this recycled gold also came increased diamond recycling,” Ehrlich stated. “If economic conditions deteriorate, we should expect not only subdued demand but additional diamond supply from recycling.”