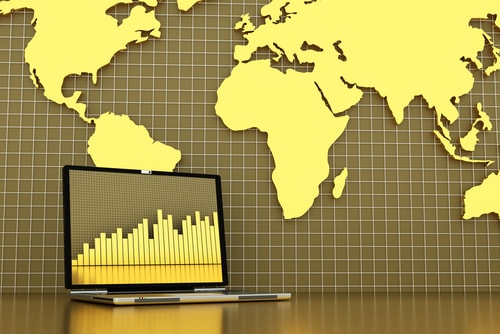 (Kitco News) - So much is on the agenda next week — more Trump impeachment drama, potential Iran dialogue, the U.S.-China developments, and most importantly the U.S. data.

Gold prices saw a strong selloff on Friday as risk-on sentiment drove the yellow metal slightly below the $1,500 an ounce mark. December Comex gold futures managed to recover in the afternoon, last trading at $1,507.50, down 0.51% on the day.

A big market mover this week was the impeachment news out of the U.S., with the House of Representatives considering impeaching U.S. President Donald Trump.

In terms of a long-term fallout from this, expect ambivalence, said London Capital Group head of research Jasper Lawler.

“If the Mueller inquiry offers us any guideline about political instability under President Trump, investors should expect short bouts of market volatility but longer-term ambivalence,” Lawler stated. “The difference this time around is that there are no U.S. tax cuts and there is a trade war.”

An interesting development for gold could be investors rushing into the U.S. dollar for safety versus the yellow metal, Lawler pointed out on Friday.

“Gold has fallen since the impeachment proceedings were announced with investors preferring the dollar as protection from political uncertainty. This firms up our view that the rally in gold prices this year has not primarily been a function of haven flows but as protection from currency devaluation. As such we think overall impeachment is neutral for gold,” Lawler explained.

For next week, it is vital to watch if the whistleblower’s complaint can get any more traction, Streible pointed out.

Another big market mover came late this week as Iranian President Hassan Rouhani said on Friday that the U.S. offered to remove all sanctions on Iran in return for talks.

“It was up for debate what sanctions will be lifted and they (the United States) had said clearly that we will lift all sanctions,” Rouhani said.

Trump quickly denied Iran’s statement by tweeting out: “Iran wanted me to lift the sanctions imposed on them in order to meet. I said, of course, NO!”

Iran wanted me to lift the sanctions imposed on them in order to meet. I said, of course, NO!

Analysts, however, said that they would not be surprised to see some talks that happen in the future. “Iran said that the U.S. was considering lifting sanctions and Trump denied it. Could be new dialogue coming out,” Streible said.

The U.S.-China trade talks are scheduled to resume on October 10, but a lot can still happen until then, warned Streible.

On Friday, CNBC reported that the White House was considering blocking all U.S. investments in China. The discussion on this matter were said to be in preliminary stages, according to a source familiar with the matter.

“Restricting investments in Chinese entities are meant to protect U.S. investors from excessive risk due to lack of regulatory supervision, the source said,” CNBC reported.

What about gold next week?

Gold prices could see some more consolidation next week, but a good level of support is $1,480, said TD Securities head of global strategy Bart Melek.

Risk appetite is back and the U.S. dollar is up, which is pressuring gold down, Melek added. “There is support around $1,480. Gold should bounce off it,” he said, noting that reasonable upper bound for gold is still at $1,535.

An essential level not to fall below is $1,490.70, said Streible. “That was the low on September 18. If we close out September on a negative basis, it might be the first loss in five months.”

Streible is neutral to slightly bearish on gold next week, but he does not think that rally is over in the long-term.

“Gold is down but not out. There could be a period that the metal is not the favorite asset for a week or two. But, equities still look weak, people are just buying into risk at the moment,” Streible said.

It’s all about data

At the end of the day, the Federal Reserve remains very much data-dependent and any disappointing economic news could boost gold prices back above the $1,500 an ounce level next week, Melek highlighted.

The big items on the agenda are the ISM manufacturing numbers on Tuesday and the employment report on Friday.

“The ISM manufacturing is projected to go a little higher to 50.3. For the payrolls report, we are looking at 140,000 bring for September,” Melek said. “Any sort of disappointment on the economy gets gold towards the $1,500 mark mainly because the Fed is looking at numbers and the economy is slowing down.”