How a small move in gold could send silver up 25% 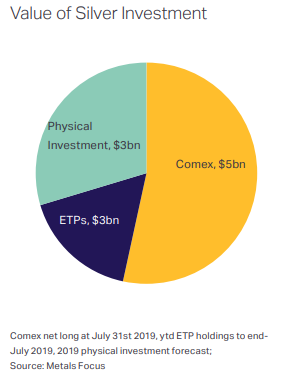 The Silver Institute commissioned a study, the Global Silver Investment, which was produced by Metals Focus.

The Silver Institute said investors are increasing exposure to silver due to growing macroeconomic uncertainty. Investors worry that the escalating U.S.-China trade war increases risk of a recession. Bond yields have gone negative, and investors are seeking out safe-haven assets.

"This is in sharp contrast to recent years' activity, when many institutional investors had been skeptical towards the metal," wrote the authors. 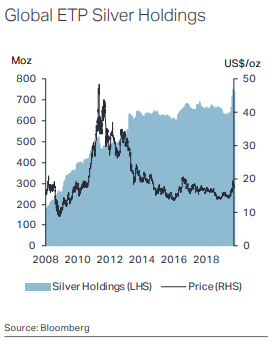 Before the recent catalyst, the study’s authors noted silver's years in the doldrums. Silver under performed gold over an almost uninterrupted eight-year period, and the gold:silver ratio rose from 30.5 in April 2011 to a multi-decade high of 93.5 in July 2019.

Still, silver is a relatively small market compared to gold and the institute cautions that "... relatively small inflows or liquidations can have a disproportionate affect on the market, leading to heightened price volatility, such as that seen less than a decade ago."

The Silver Institute pointed to the Comex.

"[As] of end-July, the value of net long managed money positions in silver stood at $5.2bn (equivalent to 312.8Moz or 9,729t) compared with $26.6bn for gold (18.6Moz / 578t), some five times higher. Hypothetically (and assuming all else remains equal), a relatively modest 5% rotation out of gold in favor of silver would see positioning in the latter rise by a dramatic 25%.”

Charts courtesy of the Silver Institute