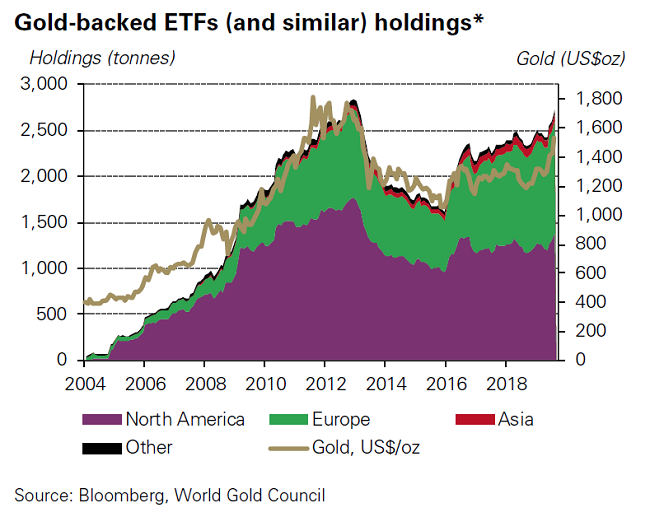 (Kitco News) -The data continue to pile up showing that September was a historic month for the gold market.

In its latest report published Tuesday, the World Gold Council (WGC) said that holding in global, gold-backed exchange traded products surpassed its 2012 levels and hit an all-time high in September.

The report said that ETF holding increased by 75.2 tonnes in September to a total of 2,808.

“Against a backdrop of easy money monetary policy by global central banks, continued geopolitical uncertainty including the looming Brexit deadline and tensions in the Middle East – as well as rising turmoil in Congress – global gold demand remained strong through the month,” the WGC said in the report.

The surge in investment demand came as prices pushed to their highest levels in six-years. Although gold has fallen from last month’s highs, the market is still holding critical support around $1,500 an ounce.

The WCG also noted a significant rise in low-cost gold-backed ETFs in the U.S., which rose 15 of the past 16 months, and have increased their collective holdings by 51% so far this year.

“New information comes out on a weekly basis that adds new uncertainty,” he said. “Gold is proving itself as an asset to protect against a variety of risks.”

“A few years ago North American dominated the market but now we are seeing a lot more European investors see gold as an important diversification tool,” he said. “Gold has established itself as a global investment asset.”

Although there are some concerns that the gold market is getting a little crowded, Artigas said that as long as market conditions persist, the trend in the gold market remains in place.

“Investors are still positioning themselves in this uncertain market,” he said.

But, investment demand is just one piece of the story that is driving gold prices higher; Artigas said that central bank demand remains another important pillar in the gold market. He added that while central bank demand might not surpass last year’s record, it is above the 10-year average.

It's 'green lights' for stocks, but what about for gold? Bill Baruch talks trades?

Bitcoin vs altcoins, who wins in 2021? - Bill Noble answers

Tuesday's Charts for Gold, Silver and Platinum and Palladium, Nov. 24