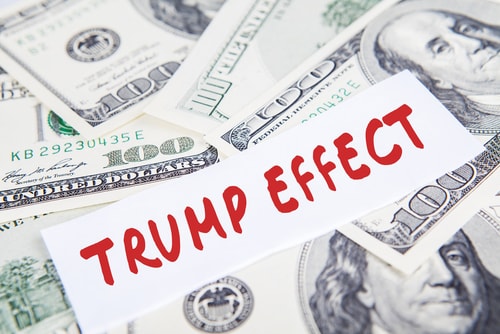 “The evidence that President Trump’s trade-related tweets affect market expectations of Fed policy is strong,” Goldman said in a research note on Monday.

We are winning, big time, against China. Companies & jobs are fleeing. Prices to us have not gone up, and in some cases, have come down. China is not our problem, though Hong Kong is not helping. Our problem is with the Fed. Raised too much & too fast. Now too slow to cut....

In contrast, Trump’s tweets that directly criticize the Fed do not have the same impact on the market’s perception of future monetary policy, the research added. “[There is] weak evidence for the notion that the market moves its monetary policy expectations in response to Presidential tweets criticizing the Fed,” the note said.

As I predicted, Jay Powell and the Federal Reserve have allowed the Dollar to get so strong, especially relative to ALL other currencies, that our manufacturers are being negatively affected. Fed Rate too high. They are their own worst enemies, they don’t have a clue. Pathetic!

When analyzing the data, Goldman looked at changes in Fed funds futures pricing before and after the publication of Trump’s tweets. Analysts in charge also cross-compared the impact of the tweets with other market activity during the 30-minute intervals around the tweets to highlight statistically bigger moves.

“There are many tweets that garner little reaction, but there are also quite a few trade policy tweets that lead to sizable swings. This is intuitive, as there are clear channels through which tariff escalation can lead to a dimmer economic outlook,” Goldman said.

The conclusion was that the markets see Trump affecting “Fed policy indirectly by influencing the macroeconomic outlook, with at most a limited perceived role for tweets about the Fed.”

Goldman’s research comes after September’s paper by the National Bureau of Economic Research that pointed to a connection between Trump’s tweets criticizing the Fed and the market’s perceived outlook on future interest rate moves.

When it comes to gold, Goldman is bullish on the metal for the rest of the year, telling Kitco News in an interview last week that the yellow metal will reach $1,600 an ounce in Q4.

“The further out you go, the higher the probability that the U.S. is going to hit a recession. We have $1,600 holding out through 2021,” Goldman Sachs analyst Mikhail Sprogis said. “What’s important for the gold market is not whether there are actual risks but what the market’s perceived risks are. We noticed that the market’s fear of recession tends to go up with lower employment rate and slower growth.”

This bullish outlook even has some upside risk ingrained as it is built on the idea that the global economy rebounds next year.

“[Gold at $1,600] is a scenario where things are not that bad. What we like to highlight is that in an environment where things do go much worse, we see much more upside in gold,” the analyst added.