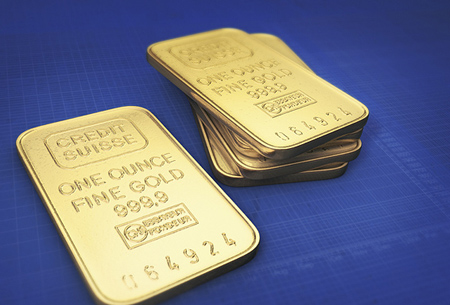 (Kitco News) - The way to survive a total collapse of the economic system is to hold gold, said the Dutch National Bank (DNB) in an article published on their website.

In the note, the DNB calls the yellow metal an "anchor of trust" that is able to retain its value "even in times of crisis."

"Gold is the perfect piggy bank – it's the anchor of trust for the financial system. If the system collapses, the gold stock can serve as a basis to build it up again," the DNB said. "Gold bolsters confidence in the stability of the central bank's balance sheet and creates a sense of security."

The DNB currently holds 600 tonnes of gold, with reserves scattered around the world.

About a third, or 31% of the DNB's gold reserves, valued at over EUR 6 billion, are held in their head office in Amsterdam, with another third, about 31% in the Federal Reserve bank in New York. The remaining 38% are stored in Canada and the U.K.

Foreign holdings used to account for a higher portion of total gold held by the DNB but the bank has retrieved part of it in 2014, in line with a host of European central banks that have, in the past few years, repatriated their gold, including Germany, Italy, and Hungary.

"A bar of gold always retains its value, crisis or no crisis. This creates a sense of security. A central bank's gold stock is therefore regarded as a symbol of solidity," the DNB said.

Gold is only a fraction of the reserves portfolio held by the DNB. In total, the central bank manages EUR 38 billion in financial assets that "serve to substantiate confidence in the Dutch financial system and to support the common European monetary policy and DNB's financial stability mission."

These assets not only include gold, but also Dollar, Yen, and Euro, as well as equities and corporate bonds.