Wild currency moves can inject volatility in earnings for multinational firms. Companies that either forgo hedging or don’t do enough of it, have in the past been hit hard due to unfavorable currency moves.

“If you look at the long sweep of history the level of concern about FX right now still remains low,” said Karl Schamotta, director of global markets strategy at Cambridge Global Payments in Toronto.

“Corporates in particular are still under-appreciating the level of risk that they face,” Schamotta said.

Earnings for S&P 500 .SPX companies are expected to have fallen 3.1% in the third quarter from a year ago, according to IBES data from Refinitiv.

A recent rise in volatility in currency markets from near five-year lows has revived some interest in guarding against currency risk, but firms’ hedging activity remains relatively weak, analysts said. 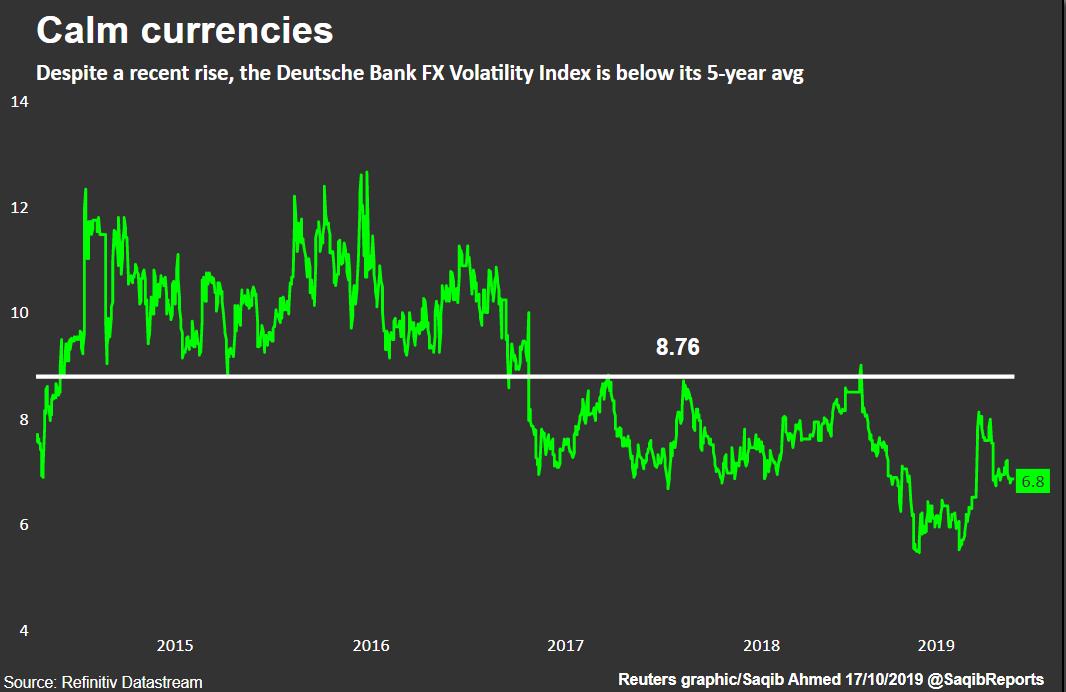 At the end of the third quarter, the dollar was up more than 6% against the euro EUR= compared to a year ago.

While there is no consolidated data on hedging activity, anecdotal evidence suggests corporate hedging appetite is light at best, analysts said.

Trade-related headlines and the associated moves in the yuan and the yen have spurred some degree of rise in hedging activity in Asian currencies, but for the majors - the most heavily traded currencies - there is little rush to hedge, analysts said.

The Deutsche Bank FX Volatility Index .DBCVIX, which slipped to a five-year low in early July, jumped as high as 8.11 by mid-August amid rising trade-related tensions.

However, the index has slipped since then and was at 6.8 on Friday, 2 points shy of its 5-year average.

Muted volatility in the currency market tends to cause companies to turn complacent when it comes to managing currency risk, Wolfgang Koester, senior strategy officer at treasury and financial management firm Kyriba said.

Traders agree. While the pickup in currency moves in August sparked some discussions around FX risk management, companies are not rushing to pour money into hedges just yet.

“We’re definitely having more discussions with clients around the currency swings but so far they haven’t seen any noticeable uptick in hedging,” said Minh Trang, senior FX trader at Silicon Valley Bank.

Such reticence in hedging might cost companies, history suggests.

For those North American companies that quantify the effect on their results from currency fluctuations, the collective hit in the second quarter was $21.01 billion, according to a Kyriba report released on Thursday.

That marked the third straight quarter that the negative impact on these companies has totaled north of $20 billion, the longest such streak in more than a decade, according to Kyriba.

Whether companies ramp up hedging activity depends on the fate of ongoing trade-related negotiations between the world’s largest economies, analysts said.

“So far, much of the trade war rhetoric remains contained. If that escalated outside of the vacuum, for example, it would be more concerning and probably create more market volatility,” said Silicon Valley Bank’s Trang.

Persistent volatility would in turn spark a renewed interest and urgency in guarding against adverse currency moves.

“The higher that implied volatility sits and for longer, the more likely it is that the conversation around hedging is going to rise at the boardroom level,” Schamotta said.