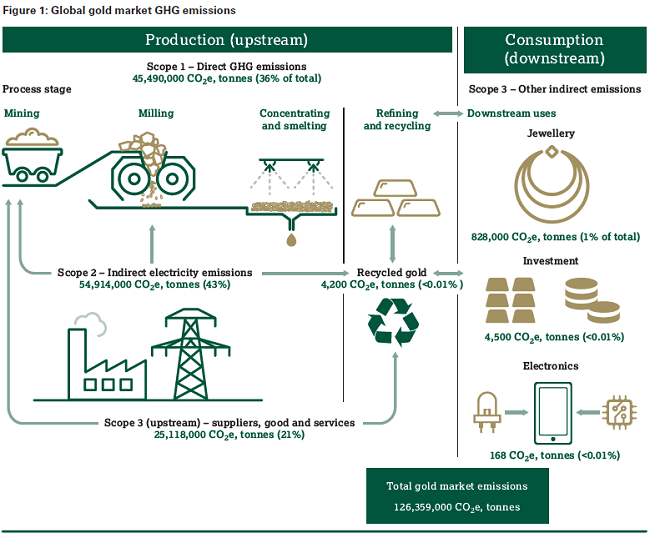 (Kitco News) - The entire world needs to take the threat of climate change seriously including the gold sector, and the World Gold Council has provided a path for companies to follow.

Wednesday, the WGC published: Gold and Climate Change: Current And Future Impacts; the report highlights the gold sector’s carbon footprint and the steps the industry can take to become net-neutral and meet the objectives of the Paris Agreement.

“There is a path for gold companies to meeting the Paris Accord. We are already seeing a lot of good progress from a lot of mining companies, there is still more work that can be done,” Terry Heymann, CFO for the WGC, said in a telephone interview with Kitco News. “Everyone needs to play their role when it comes to combating climate change and the gold industry is no exception.”

Gold production has by far the largest footprint in the entire sector.

The WGC said that last year about 32,689 tonnes of greenhouse gasses were released last year for every tonne of gold produced.

“It’s not an easy path right now but it’s feasible for mining companies to play their role and operate with net-zero emissions,” he said. “It’s only going to get easier as technology advances.”

For power production, the WGC highlighted that it is now cheaper for mining companies to use renewable energy sources like wind and power and conventional electricity production.

“Costs for renewable energy have reduced rapidly and consistently over the past decade, driven down with the huge increase in deployment,” the report said.

Heyman added that not only is green energy now cheaper but prices are less volatile compared to diesel generation, which provides producers with more stable operating costs.

“From a purely economic perspective, therefore, there is a clear business case for the rapid replacement of diesel power with renewables,” the report said.

And it’s not only power generation that has become cheaper but also battery storage has improved as prices have been reduced.

Another segment of the mining industry that can target to lower its carbon footprint is transportation. Huge diesel powered vehicles are used to transport ore from the mine site to the mill. The WGC said that these fleets can eventually be replaced by electric vehicles.

“The use of battery-electric vehicles is growing rapidly across the globe, with commercially-available applications now widespread across cars, buses, trucks and ferries,” the WGC said. “Gold mining should be able to start deploying electric vehicles (and/or other low-carbon transport technologies, such as fuel-cell powered vehicles) cost-effectively from the middle of the next decade, if not before.”

The report noted that the use of electric vehicles, powered by renewable energy would reduce emission in the gold sector by up to 95%.

Not only are the ideas proposed by the World Gold Council are positive for the environment but Heymann said that the development of renewable technology could help in the development of indigenous communities located close to mines.

“The path that we have outlined presents an opportunity for the mining sector to promote sustainable social development,” said Heymann.