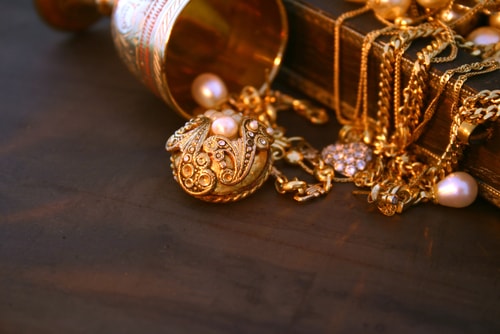 (Kitco News) It’s time to celebrate Diwali, known as the Festival of Light, but consumers could get bogged down by surging domestic gold prices, which are keeping purchases restrained despite the auspicious time to buy jewelry, according to analysts.

The Diwali celebrations begin on Friday with Dhanteras — the most auspicious day to buy gold jewelry for Hindus, which is dedicated to Lakshmi, the Hindu goddess of wealth and prosperity.

The majority of sales will happen on Friday. But, another key day will be Sunday, when people exchange gifts and sometimes continue their shopping spree as they hunt for bargains.

“The first big day is tomorrow. And then Sunday, which marks Diwali. Those are going to be the key days,” Rhona O’Connell, INTL FCStone head of market analysis of EMEA and Asia regions, told Kitco News on Thursday.

The biggest cloud over the festivities will be the gold prices, which surged in domestic currency to record highs in September. Since then prices have lowered a bit, but remain on the higher-end of their trading range, which is keeping buyers at bay.

“Certainly what we’ve seen over the last four-five weeks was that the local Indian gold market has been non-existent,” O’Connell said. “What we’ve had were record-high prices in rupee-terms.”

Another piece of the puzzle is the gloomy economic outlook, which is pushing the consumers to wait. “To some extent in China and India, there is also concern about the economic outlook. A lot of people are sitting on their hands. They don’t know what the prognosis is,” O’Connell stated.

Consumers are very wary to spend their money during such uncertainty, Haresh Acharya, director of the India Bullion and Jewelers’ Association (IBJA) told The Times of India.

“People don’t have much cash on hand due to a liquidity shortage. Those with the availability of cash are holding on to it amid weakened consumer sentiment. The purchases are more purpose-orientated for weddings than driven by muhurat,” Acharya said.

“Generally speaking, a price range change takes a bit of time to get used to. Some people choose to wait, thinking the prices will come down. Others simply can’t afford gold at these levels,” O’Connell pointed out.

A 20% surge in prices will take time to digest. “All of that hasn’t gone down well and has deterred the would-be-buyers,” she added. Gold prices are nearly $260 higher an ounce this October versus a year ago.

Some even fear that there will be a 50% drop in purchases during the Diwali festivities, SP Angel said on Wednesday citing NDTV report.

“Gold sales usually hit 40t on the first day of the festival every year, however, Indian bullion experts believe that sales could decrease 50% this year,” SP Angel analysts wrote.

Things are picking up

However, there is hope that jewelers will offer discounts attractive enough to encourage consumers to buy.

“Earlier this week it looked like price differential leveled more or less. And there was interest from the jewelers,” O’Connell said.

The offers retailers come up with this festival season will be key, said Ahammed MP, chairman of Malabar Gold & Diamonds. If the deals are attractive enough, it could loosen up purchases, he told India’s Business Today.

“Most of the jewelry retail chains have lined up attractive discounts and offers to perk up retail demand and sales to cash in on the wedding and festival season demands,” Ahammed stated. “Retail trade has also firmed up marketing, merchandise and expansion strategies to woo both the festive and bridal jewelry buyers.”

Also, in some cases consumers might be more inclined to buy gold bars instead of gold jewelry since the former does not have a fabrication charge, O’Connell added. “People might buy gold bars and then at a later stage convert into jewelry,” she said.

Those celebrating Diwali buy gold during the festival because it is considered to be an auspicious time to buy precious metals and gold jewelry. “Gold has a religious significance,” said O’Connell.

Also, many stores offer discounts during this time.

On top of that, the majority of the Indian population prefer storing money in the form of gold for safety.

“Around 60% of India’s population is dependent on the agrarian sectors to one degree or another. It is no coincidence that the two major festival seasons are at the end of the harvest season,” O’Connell said. “A lot of people don’t trust the banks. Gold doesn’t just have religious connotations. They regard gold as safe savings.”

Weak Asian demand is not likely to recover anytime soon, according to Capital Economics.

Higher gold prices and slower economic growth in China are one of the main reasons behind lower demand, Palmas pointed out.

“We think that two main factors are behind this broad-based weakness. One is the recent surge in the local currency price of gold on the back of the rally in the dollar-denominated gold price and the sharp depreciation of the renminbi. The other is a general slowdown in economic growth in China, which has dampened consumer demand for gold,” she wrote.

And even though some economists expect global growth to pick up next year, they warn that it might not be enough to boost demand for the physical metal in Asia.

“The recent hike to precious metals import duties in India will be an additional headwind to consumer demand,” Palmas said.

What this means for gold prices going forward is that the rally is likely to reverse and prices will decline back to the $1,350 level by the end of next year, Capital Economics stated.

“Soft consumer demand will weigh on the gold price over the coming year. This, together with our view that U.S. Treasury yields will rise further as the Fed disappoints investors’ expectations for aggressive easing, underpins our forecast for the gold price to drop back to $1,350 per ounce by end-2020,” Palmas said.