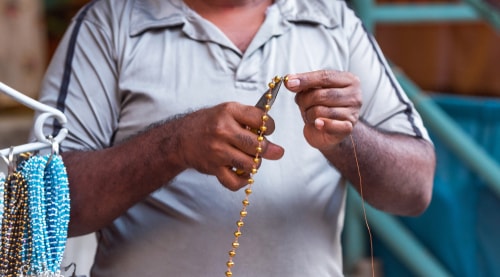 The Diwali celebrations, known as the Festival of Light, were in full swing this past weekend. Still, consumers were bogged down by surging domestic gold prices, which kept purchases restrained, despite the auspicious time to buy jewelry, said SP Angel.

The festival began on Friday with Dhanteras — the most auspicious day to buy gold jewelry for Hindus. Another key date for the celebrations was Sunday — the time people exchange gifts as well as continue their shopping spree as they hunt for bargains.

"The Indian community celebrated the Diwali festival yesterday," analysts at SP Angel wrote on Monday. "India Today reports that sales fell by as much as 40% due to higher gold prices and lower consumer activity on Dhanteras day, the most auspicious day in the Hindu calendar."

It is estimated that only 6,000 kg of gold was sold on Friday versus last year's 17,000 kg worth of gold, India Today said citing the Confederation of All India Traders (CAIT).

"As per an estimate, there was a decline of business from 35 to 40 percent which is a cause of major worry for the traders," CAIT's Gold and Jewelry Committee chairman Pankaj Arora said in a statement.

One of the biggest clouds over the festivities was the gold price, which surged in domestic currency to record highs in September. Since then, prices have fallen a bit, but remain at the higher-end of their trading range, keeping buyers at bay.

"Certainly what we've seen over the last four-five weeks was that the local Indian gold market has been non-existent," Rhona O'Connell, INTL FCStone head of market analysis of EMEA and Asia regions, told Kitco News on Thursday. "What we've had were record-high prices in rupee-terms."

It is not surprising to see sales drop significantly this year, O'Connell added in a research note on Monday. "Diwali demand in India looks like being somewhere between 25% and 35% below last year's levels, which should not surprise anyone given the state of the market and high local prices," she wrote. "We are still in the Festival period, but Dhanteras on Friday was some 25% below last year, even with dealer discounts."

Another piece of the puzzle behind lower sales is the gloomy economic outlook. "To some extent, in China and India, there is also concern about the economic outlook. A lot of people are sitting on their hands. They don't know what the prognosis is," O'Connell said.