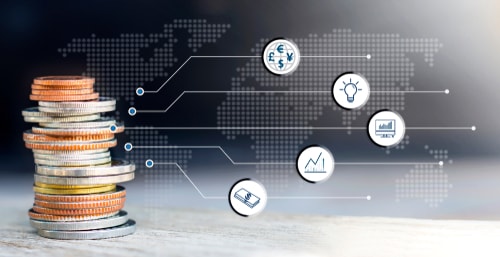 (Kitco News) The Federal Reserve is likely to pause after cutting rates for the third time this year on Wednesday, but that doesn’t mean the gold rally is over, according to analysts.

The consensus among analysts is that the Fed will cut rates by another 25bps this week while introducing a much more hawkish language into the monetary policy statement.

When cutting the last two times, Fed officials have pointed to fears of slowing economic growth, U.S.-China trade uncertainty, and low inflation as the main reason for lower rates.

This upcoming meeting will likely take the target range down to 1.5%-1.75% from 1.75%-2%, with the market anticipating a 94.6% chance of a rate cut on Wednesday, according to the CME FedWatch Tool.

Major changes ahead for the Fed

One of the biggest changes in the statement will likely be the Fed officials describing the third cut as an end to the “midcycle” adjustment that the Fed Chair Jerome Powell spoke about back in July, Goldman Sachs said in a report published last week.

“Strong signaling from Fed leadership indicates that the modest trade war de-escalation since September has not deterred them from completing a 75bp, 1990s-style ‘mid-cycle adjustment’,” Goldman economist Spencer Hill said.

Another major change could be the central bank removing its key phrase that it will “act as appropriate to sustain the expansion,” which has been present in each statement since June.

“We expect the ‘act as appropriate’ sentence to be replaced with a reference to the easing actions already delivered (mirroring the language in October 2007 and June 2008) coupled with the following less committal guidance: ‘will act as needed to promote its objectives,’” Hill wrote.

A hawkish tone from Powell should be expected: “Chair Powell will have a fine line to walk … to satisfy market participants … as well as the critics of insurance cuts … we expect a slightly hawkish tone, with Powell alluding to a baseline of unchanged policy but emphasizing data-dependence and the ability to respond quickly if the outlook deteriorates,” Hill added.

The main takeaway for gold investors should be that gold will remain supported despite whether the Fed sounds dovish or hawkish, analysts said.

“The gold market appears to have priced in a 25bps rate cut in October, but a hawkish Fed cut could help to sustain the USD 1,500/oz level, as gold tactical positioning has lightened and is below its levels ahead of the previous two FOMC meetings when the Fed cut rates,” Standard Chartered precious metals analyst Suki Cooper said in a report published last week.

Aside from the monetary policy, there is enough geopolitical tensions to keep gold prices trading in the $1,500.

“Uncertainty around UK elections, Brexit and the Middle East is keeping gold in focus, but has yet to stimulate another tranche of investment demand,” Cooper said. “We believe that slowing growth and a benign inflation outlook have convinced core FOMC members that an October cut is warranted, while a December rate cut is a close call.”

Any price drops in gold are likely to be restrained to the $1,450 level, Cooper added. 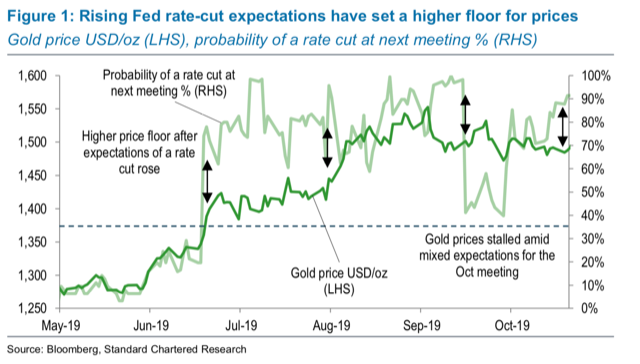 "Combined with CB [central bank] gold purchases related to de-dollarization, we maintain our bullish gold target of $1600/toz despite a potential easing in policy uncertainty,” Goldman Sachs economists wrote in a report on Friday. “As macro uncertainty is unlikely to be resolved soon, we think focus needs to be on what return will stimulate investment; a precautionary savings glut has created ample capital for such investments, but only at the right price.”

Another major gold driver for next year will a precautionary savings glut, according to Goldman.

“With investment growth now falling due to rising uncertainty, a precautionary savings glut is developing, supporting gold and bond prices. This uncertainty, in turn, has steadily increased the demand for cash. So much so, that it has been running into Fed-imposed supply constraints, dislocating repo rates,” Goldman economists pointed out.

But, the Fed is unlikely to comment on the repo rates in its statement on Wednesday, but it doesn’t mean Powell won’t be asked about it during the press conference, Goldman added.

“The current savings glut … is far less virtuous. This is driven by an intended rise in precautionary savings (supporting the dollar), stagnant real asset prices and a decline in investment due to rising policy uncertainty. When combined with 750 tonnes of central bank gold purchases related to de-dollarization and defensive portfolio rotations, the savings glut means we maintain our bullish gold stance,” the economists wrote.