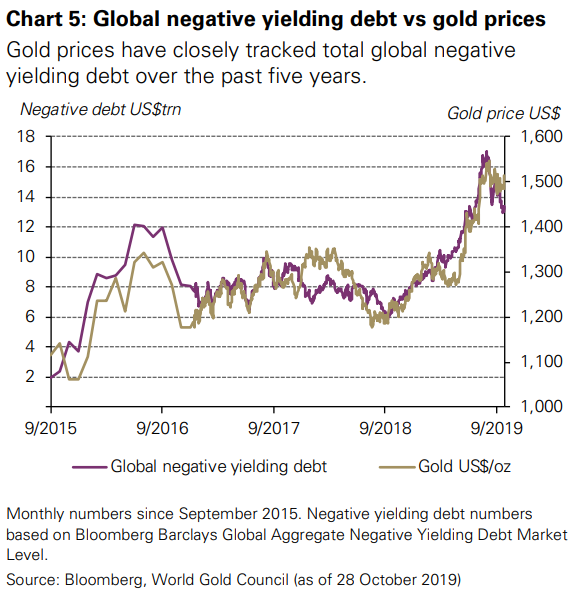 (Kitco News) - Once again investment demand is proving itself to be the dominant force in the gold market as demand for gold-backed exchange traded products (ETFs) saw its strongest quarter in three years according to the latest research from the World Gold Council.

In its quarterly Gold Demand Trend report the WGC said that inflows into ETFs between July and September totaled 258.2 tonnes, the largest increase since the first quarter of 2016. The WGC added that September saw ETF gold holdings rise to a record level of 2,855 tonnes, surpassing the previous peak set in 2012.

In total, the global gold market saw modest demand growth of 1,107.9 tonnes (t) in the third quarter, the report said.

Juan Carlos Artigas, director of investment research at the World Gold Council, said in a telephone interview with Kitco News that the council sees three factors driving investment demand: a high level on ongoing uncertainty, record level of negative yield bonds and the precious metal’s momentum as prices rose 20% on the year during the third quarter. 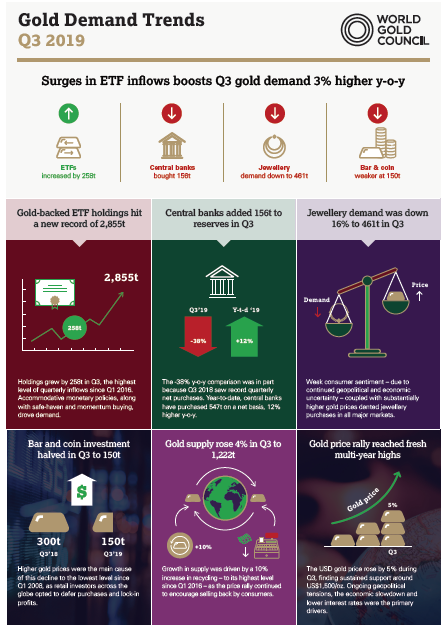 Artigas said that unlike 2016, when strong investor demand quickly evaporated, he sees a lot more resilience and stability in today’s gold market. He noted that gold prices appear to be stabilizing around $1,500 an ounce even as the market faces headwinds from record valuations in equity markets.

“Even though investors want exposure to equity markets, they are not taking away their gold hedges,” he said. “We expect investment demand to continue to be robust because of growing uncertainty and low interest rates.”

Although central bank demand might not surpass last year’s record total, Artigas said that the current trend shows that demand remains consistent. He noted that central banks are on track to be net gold buyers for 10 consecutive years. He added that he also doesn’t expect this trend to shift anytime soon.

“In these particular conditions gold is well suited to be an integral component of foreign reserves,” he said.

Jewelry and Bar and Coin Demand Fall Sharply In Q3

However, there has been a downside to gold’s dramatic price rally during the third quarter. Consumer demand for physical bullion dropped dramatically, especially in important gold markets: China and India.

“Consumers were deterred from making fresh purchases during the quarter as the price rally – which began in June – gathered momentum,” the report said.

However, demand wasn’t down across the board, the WGC said that the U.S. saw its eleventh consecutive quarter of growth, with jewelry purchase up 1%, albeit a slower pace compared to the second quarter.

“Consumer confidence in the economy remained upbeat during the quarter, helping to support sales, but deteriorated slightly compared to the first half of the year. Demand was also hampered by the substantial rise in the gold price during Q3,” the WGC said.

Artigas said that it’s not surprising to see weak consumer demand as prices rose more than 20% during the third quarter. He added that they expect sales to increase as consumers adapt and get more comfortable with the higher gold prices.

“The quick rise took a lot of consumers by surprise,” he said. “It will take some time for consumers to figure out what is happening. We expect consumers will come back as the price continues to stabilize.”

“The [year-to-date] picture is similarly bleak: cumulative demand in the first three quarters was at its lowest level since 2009,” the WGC said. “A soaring gold price across multiple currencies has prompted retail investors in many markets to either wait in anticipation of a price dip or sell a portion of their holdings to realize profits.”

While gold ETF demand rose to its highest level since 2016, the WGC said that the supply of gold also saw its biggest rise in three years.

Total gold supply rose to 1,222.30 tonnes, the report said. The supply was driven by a 10% increase in recycled.

However, the report noted that mine supply declined by 1% in the third quarter.