LONDON (Reuters) - Germany’s 10-year bond yield edged down from five-month highs on Friday after U.S. President Donald Trump said he has not agreed to roll back tariffs on China, raising concern about the outcome of talks to de-escalate a bitter trade war.

In volatile trade, yields across the bloc had risen earlier as hopes for a trade deal dented demand for safe haven assets.

Officials on both sides said on Thursday that China and the United States have agreed to roll back tariffs on each others’ goods in a “phase one” trade deal if it is completed.

“There is a bit of a bid to bonds but it’s not enormous and unless there is more of a pronouncement that there is no trade deal, bonds are unlikely to move much more,” said Lyn Graham-Taylor, fixed income strategist at Rabobank

It is still up 12 bps this week and set for its biggest weekly rise in a month.

A selloff across world bond markets this week has sent German 20-year and French 10-year yields into positive territory for the first time since July.

Ten-year bond yields in Austria and Finland also briefly moved back into positive territory FI10YT=RR AT10YT=RR on Friday, while Italy’s two-year bond yield climbed back above 0% for the first time since August.

Most 10-year government bond yields were flat to a touch lower in late trade FR10YT=RR NL10YT=RR. Italian yields were higher on the day but off more than two month highs hit earlier IT10YT=RR IT2YT=RR.

Analysts said Italy has borne the brunt of selling in European bonds this week as its strong price gains this year prompted investors to lock in profits as year-end draws closer.

Focus turned to Spain’s election on Sunday, the country’s fourth in four years. The bond market appears unconcerned, with the gap between Spanish and German 10-year bond yields near its lowest point since July at 64 bps DE10ES10=RR.

“I think it has to do with the view and message from the polls that no clear-cut majority is likely to come out of this election and if anything the odds for a more left-wing government, which could risk higher spending, is very low.” 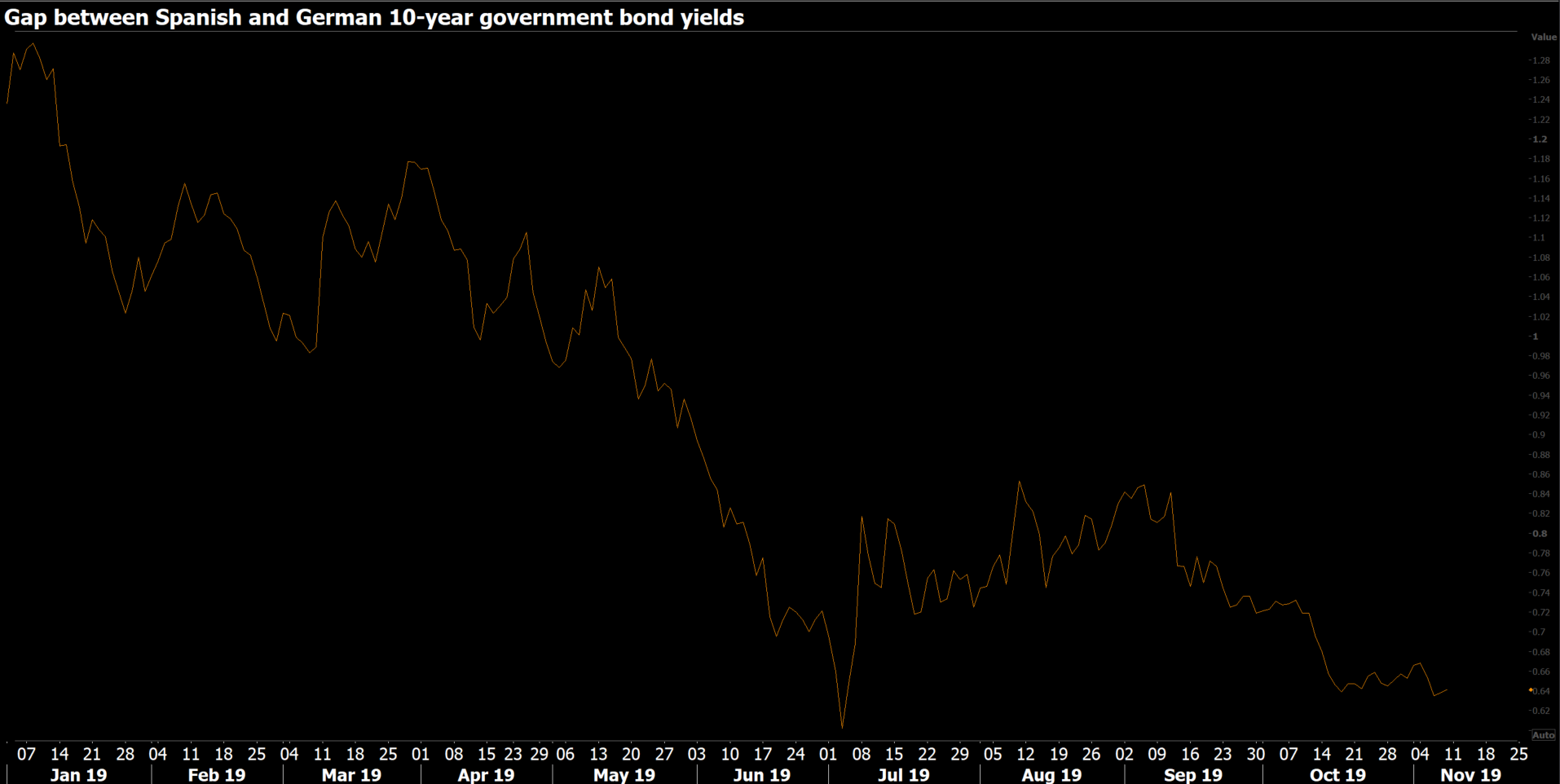 Neither the left nor the right will win a majority in Spain’s parliamentary election this Sunday, according to a calculation by El Pais newspaper based on dozens of opinion polls.

“The picture is relatively good for the periphery, especially Spain. Catalonia is volatile and relevant but poses no immediate risk.”