TOKYO (Reuters) - The promise of PeptiDream Inc’s drug-discovery technology and its lucrative research-for-hire contracts have made it a darling of the Tokyo stock market. Now, those gains have made it a target for short-seller Muddy Waters.

The company, which has seen its market value jump fivefold to $6 billion over the past four years, is now pivoting its strategy to in-house research, using its technology that allows it to create libraries of peptide chemicals that can bind drugs to cells.

Muddy Waters Capital LLC says that the biotech company’s new, and traditional, businesses are flawed and is betting its shares will fall back to earth as a result.

Since its listing in 2013, PeptiDream has grown from a lab start-up into a company with the highest profit margins in the Japanese pharmaceutical industry - without ever having brought a drug to market. Its technology has attracted a bevy of partners including Novartis AG, Merck & Co and Shionogi & Co.

“We’re on the cusp of over the next 1-5 years of introducing a multitude of drugs into the clinic through our big pharma and strategic partnerships,” PeptiDream President Patrick Reid told Reuters in an interview.

“We’d rather get 5% of 100 drugs than get 100% of five drugs,” he said. He estimates that around half of all drugs being worked on by PeptiDream partners are cancer drugs.

PeptiDream’s rocketing market value has been helped by its traditional fees for collaborating in R&D and licensing deals to use its libraries. Its operating profit margin is 50%, the highest of all 37 members in the Tokyo market’s pharma index, where the average is 14%.

However the shares of the Kawasaki-based company fell 4 percent on the Nov. 7 release of Muddy Water’s report, which doubted the viability of many of its existing partnerships and said investors were “deluded as to its potential for commercializing drugs”.

“There’s real technology there, but it’s the usefulness of the technology that we question,” Muddy Waters founder Carson Block said in an interview with Reuters. “It’s cool, but so far it’s been unable to yield anything that’s meaningful.”

PeptiDream was now “massively overvalued”, Block said, adding that “many of these partnerships that are the basis of this valuation seem inactive”.

PeptiDream’s Reid declined to comment on the Muddy Waters report, referring to a company statement that “completely rejects” the short-seller’s assertions.

The company says it has 19 discovery and development partners, predominantly big to mid pharma firms. Among its 101 programs in progress, compared with 60 in 2017, two are cancer-related compounds being developed with Bristol-Myers Squibb now in phase 1 clinical studies.

Japan’s Mitsubishi Tanabe Pharma Corp declined to comment on the status of its relationship. The other six companies did not respond to multiple requests for comment.

Block declined to name a price target for PeptiDream or the size of its short strategy, which pays off when a stock falls.

PeptiDream’s shares are trading about 5% lower than before the release of Block’s report. PeptiDream is the second short play in Japan for Muddy Waters, which became famous for its bearish calls on Chinese companies. Muddy Waters announced a short bet on Nidec Corp in December 2016. Shares in the maker of precision motors have since risen more than 60%.

“It’s a bunt single, and that’s better than a strikeout,” Block said of PeptiDream’s share fall, referring by bunt single to a baseball play that sees a batter eke out a small gain.

“Japan’s potentially interesting. We might look to come back and hit some more bunt singles and see if we can build up a brand.”

PeptiDream’s research partners do the heavy lifting in bringing drugs through clinical trials to market - allowing the company to avoid much of the large development costs and risks.

Even so, as the company increasingly looks to keep some ownership of its research, it will still receive future milestone payments and royalties.

On top of its research partnerships, it also has seven license agreements for its library or drug-discovery platform.

PeptiDream concentrates on “constrained peptides”, particularly macrocyclic peptides - hula hoops of natural and non-natural amino acids that can carry various cargoes to specific types of cells - such as cancer or inflamed tissue.

Founded in 2006, the company sprang out of the research of University of Tokyo professor Hiroaki Suga. Suga looked to Reid, then an associate professor at the university, to help forge the connections to big pharma.

As discoveries related to antibody and small-molecule treatments dwindle, peptide-based compounds are likely to become increasingly important as a class of drugs, said Bernstein analyst Shen He, who has an “outperform” on the stock.

“PeptiDream is one of the best technology platforms out there to solve this,” He said. “But it’s not an overnight journey.” 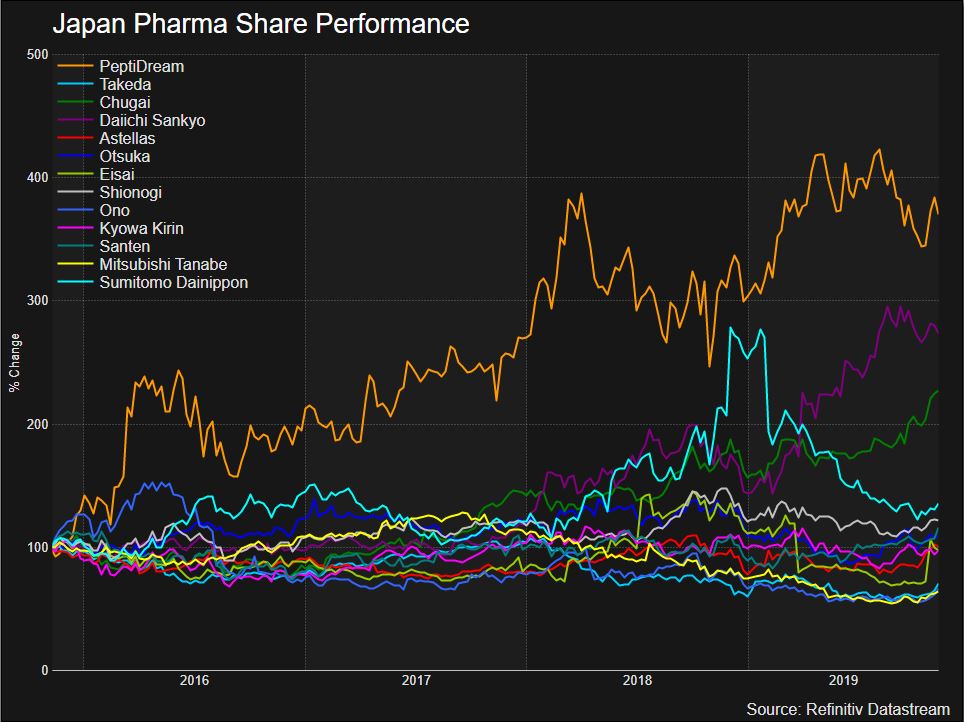