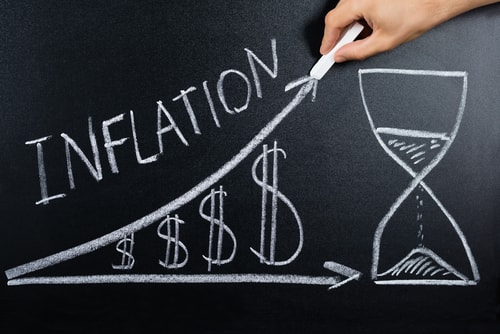 The U.S. Consumer Price Index rose 0.4% in October after an unchanged reading in September, the U.S. Labor Department said on Wednesday. Consensus forecasts were calling for a rise of 0.3%.

In an immediate reaction to the data, gold prices edged down but remained near daily highs with December Comex gold last trading at $1,463.10, up 0.65% on the day.

Prior to the release, gold was already trading solidly higher, supported by keener risk aversion, said Kitco’s senior technical analyst Jim Wyckoff. "The trade talks’ progress or lack thereof has been a rollercoaster affair for the markets for many months," Wyckoff said.

The energy index was behind the monthly increase, up 2.7% in October, with the gasoline index rising 3.7%, the report said. Also, medical care, recreation, and food costs were up.

Monthly core inflation, which strips out volatile food and energy costs, came in as expected, up 0.2% in October, following a 0.1% advance in September. Annualized core inflation was at 2.3% versus the expected 2.4%.

Annualized inflation also beat market estimates, coming in at 1.8% versus the expected 1.7% in October.

Inflation is one of the more important reports out this week considering the Federal Reserve’s latest comments that it won't consider raising rates until inflation "significantly" improves.

"There has been a bit of acceleration over the past few months, but no sign that we'll see a significant rise as far as the Fed is concerned. Generally, the inflation picture is benign," Capital Economics U.S. economist Andrew Hunter told Kitco News last week.

It is looking increasingly unlikely that the Fed will cut rates in December, but another cut is not entirely out of the picture for 2020, Hunter added.

Analysts said the October CPI report backed the Fed’s hawkish cut in October, in which the central bank signaled a pause.