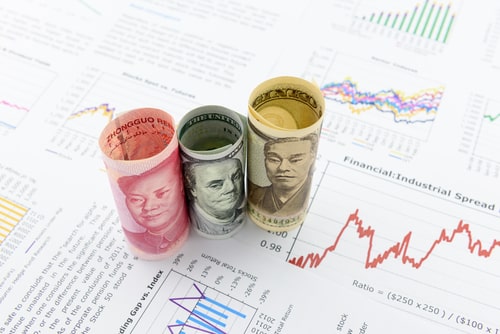 (Kitco News) Trade tensions between the U.S. and China have “increased the risk of a financial decoupling” between the two nations, which could have significant ramifications on China’s reserves as well as global supply chains, said Australia and New Zealand Banking Group (ANZ).

To deal with the risk coming from the trade war, China is looking to diversify into other currencies and increase its ‘shadow reserves,’ ANZ said in one of its latest reports.

“Although China still allocates a high share of its FX exchange reserves to the USD ... the pace of diversification into other currencies will likely quicken going forward,” ANZ said.

Exactly which currencies China prefers to diversify into is still unclear, but they could include Japanese yen, British pound, and the euro, ANZ told CNBC last week.

China has been upping its exposure to alternative investments via state-owned companies, banks, and funds co-managed with other countries, ANZ analysts noted.

Beijing seems to be interested in assets such as equities as well as loan issuances for projects related to its Belt and Toad initiatives, the report stated. “These offshore investments, called China’s shadow reserves, amounted to USD1.86 (trillion) in historical value as of June 2019,” ANZ wrote.

The third tool at China’s disposal is buying up gold, which it has been doing all of this year, pausing only in October. The country’s gold holdings stood at record levels of 1,957.5 tons as of October. Since December, the country’s central bank bought 116.6 tons worth of gold.

Some banks, including Wells Fargo, spoken out that China’s gold holdings could be much higher than what is being reported.

There were also reports coming from Max Keiser, host of the Keiser Report, that China is secretly hoarding gold and is planning to launch a gold-backed cryptocurrency.

China has also been slowly reducing its exposure to U.S. Treasuries. China has been the largest holder before being overtaken by Japan in June. CNCB cited DBS bank as saying that China has already reduced its holdings by $88 billion during the last 14 months.

This diversification trend in China might be here to stay, according to ANZ, which sees the potential ‘Phase One’ trade deal with the U.S. as not changing the outlook much.

“Although US-China ‘Phase One’ deal has put tariff war on hold, nationalism and protectionism will continue to drive the decoupling of the world’s two largest economies, and a permanent transformation of global supply chains,” ANZ said in the report.