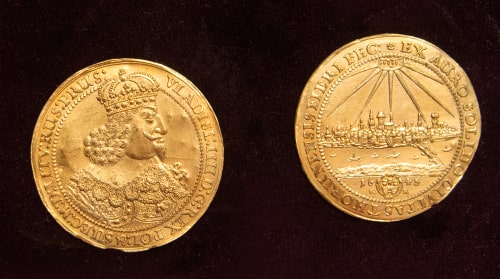 (Kitco News) After boosting its gold reserves for the past two years, Poland is bringing its gold back home.

In its latest move, Poland repatriated 100 tons of gold from the Bank of England’s storage in London to show the strength of the country’s economy, said the National Bank of Poland (NBP) on Monday.

Also, the trend of bringing the precious metal back home will continue if the “reserve situation is favorable,” with at least half of Poland’s gold reserves to be stored at home, Glapinski added.

Poland has stepped up its gold buying as it purchased 125 tons during the past two years, increasing its reserves to 228.6 tons, NBP said. Total gold reserves are now worth around $10.8 billion, with half of the reserves still stored in England, said Glapinski.

The country now holds the 22nd spot as the biggest bullion holder in the world, the central bank added.

If Poland chose to sell its gold, it would have “multi-billion” profits, but it does not plan to do so, Glapinski pointed out. The central bank’s governor did not rule out more gold purchases in the future.

Central banks around the world have been accelerating their gold buying this year, with Serbia being the latest example as it added nine tons of gold to its reserves in October.

Serbia followed in the footsteps of other central banks, including Russia, China, Hungary, and Poland.

Central bank gold buying helped push total bullion demand to a three-year high in the first half of 2019, said the World Gold Council (WGC) in its second-quarter Gold Demand Trends report back in August. In November, the WGC reported that central banks purchased 547 tons of gold on a net basis year-to-date, which is 12% higher than a year ago.

The current trend shows that demand remains consistent, WGC director of investment research Juan Carlos Artigas told Kitco News in a telephone interview in November. “In these particular conditions gold is well suited to be an integral component of foreign reserves,” Artigas said.

Drivers encouraging central banks to buy more gold include the goal to diversify and de-dollarize in light of geopolitical risks and trade tensions, Standard Chartered analyst Suki Cooper said during her keynote address at the Gold Forum Americas in September.

Increased pace of buying has also helped gold find a new floor, Cooper added. “With the strength that we’ve seen in the central bank buying, the floor for the gold market, if we were to see a selloff, is much closer to $1,450,” she said.