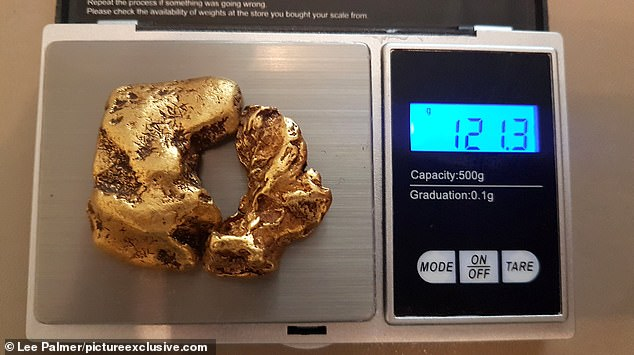 (Kitco News) - Lying face down in a river doesn’t sound like fun for most people, but the experience is paying dividends to one anonymous prospector who has found the largest gold nugget in U.K history.

According to media reports, the nugget was found in two pieces in a Scottish creek in May. Because of the significance of the discovery, both the landowner and the treasure hunter have remained anonymous. The discovery was disclosed by Lee Palmer, author of Gold Occurrences in the UK.

The two pieces of the nugget fit together to form a doughnut shape, with a hole in the middle. Because it’s in two pieces, it’s been named The Reunion Nugget. The 22-carat lump of gold weighs 4.2 ounces.

'There are no impurities in it. It is just a pure gold nugget of about 22 carats. It really is a remarkable find,” Palmer said in an interview with the Daily Mail.

According to Palmer the nugget could be worth more than $100,000. The fact that the nugget is in two pieces shouldn’t impact the rock’s value, he added.

“From the top you could say it looks like two bits, but when you see it from underneath, it's a perfect fit. It's like an exact jigsaw, there's no disputing it,” Palmer said. “Even if you took the largest individual piece, it is still the biggest one in the UK. Add together the second piece and the story behind it and you've got something amazing.”

The gold was found through sniping, which is where a person wearing a dry suit and using a facemask and snorkel search for gold in rivers and creeks.

As for what is next for the gold nugget, Palmer said that he hope it will be bought by the National Museum of Scotland or the Natural History Museum.

The latest discovery smashes the current record for the biggest gold nugget in the U.K., which comes in at about 3 ounces. The Douglas Nugget was discovered in 2016, also in Scotland.