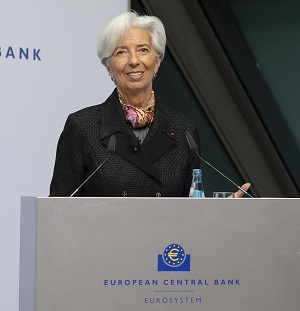 The latest ECB meeting and decision was a historic moment as Christine Lagarde took the reins as the central bank’s first female president. In Lagarde’s debut opening statement, she highlighted that although economic conditions have improved slightly, the risks are still tilted to the downside.

“Let’s face it; it’s weak growth. Economic growth is not at its potential,” Lagarde said during the question-and-answer portion of her press conference.

The central bank’s latest economic projections points to meek growth through 2022 and shows inflation will remain subdued. In its latest forecast, the ECB sees the eurozone economy growing 1.2% in 2020, up a tick from September’s estimate of 1.1%. Economic growth is expected to rise to 1.4% in 2021 and 2022.

“Looking ahead, the euro-area expansion will continue to be supported by favorable financing conditions, further employment gains in conjunction with rising wages, the mildly expansionary euro area fiscal stance and the ongoing – albeit somewhat slower – growth in global activity,” Lagarde said in her opening statement. “Over the medium term, inflation is expected to increase, supported by our monetary policy measures, the ongoing economic expansion and solid wage growth.” 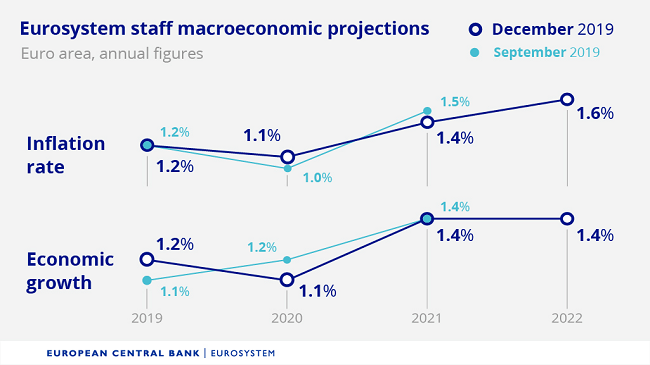 While the ECB is expected to maintain its loose monetary policy for the foreseeable future, Lagarde said that European governments have to do their part to promote economic growth.

“The implementation of structural policies in euro-area countries needs to be substantially stepped up to boost euro area productivity and growth potential, reduce structural unemployment and increase resilience,” she said.

The latest comments from Lagarde and the ECB’s projections helped to push gold prices to a five-week high and back within striking distance of $1,500 an ounce. However, after the initial pop, the market has given back some of those gains; February gold futures last traded at $1,481.60 an ounce, up 0.43% on the day.

According to some market analysts, the ECB’s monetary policy stance will continue to support gold prices through 2020.

“The ECB will do everything to push inflation higher and that will be good for gold,” said Ronald-Peter Stoeferle, fund manager at Incrementum AG, in a recent interview with Kitco News, ahead of the ECB’s monetary policy decision.