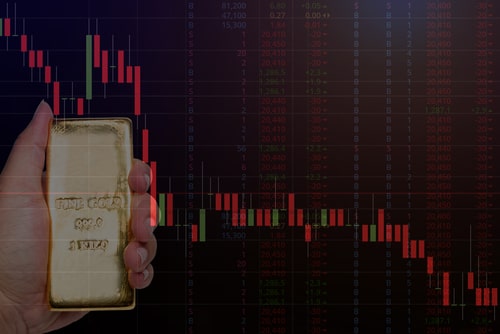 (Kitco News) Gold lost its 1% daily gain as prices sold off after U.S. President Donald Trump tweeted that a trade deal with China is "very close."

“Getting VERY close to a BIG DEAL with China. They want it, and so do we!” Trump tweeted Thursday morning.

“The tweet from U.S. President got risk appetite hopping here. The S&P 500 was up 0.9%. We had yields jumping higher; the U.S. dollar strengthened. All the elements that typically work for or against gold, worked against it today,” Melek said.

Markets were rallying because investors were starting to believe Trump’s optimism and were pricing in less of a dovish Federal Reserve going forward, Melek added.

“When the president comes out and tells the market that he is optimistic and this is getting done soon, the markets essentially start to believe that expectations of firming growth are for real and there is less of a chance the Federal Reserve cuts rates next year,” he said. “There is hope that equity markets will continue to perform well. There is a large vote of confidence in the form of significantly higher equity markets. That’s meaningful for people and drives capital away from risk-averse assets like gold and moves them into risk-loving portfolio.”

Gold could head a little bit lower from here, noted Melek. “My take is high $1,450s over the next little while is probably not an unreasonable thing to say.”

Earlier in the day, gold rose above an important technical level on downbeat U.S. macro data and a dovish European Central Bank. The price move could potentially have triggered a re-take of $1,500 an ounce level, said RJO Futures senior market strategist Phillip Streible.

“Gold took out $1,489.90 earlier this morning and I thought it might be breaking out of that downtrend,” Streible said. “But, gold was not able to build momentum on it…You knew something had to happen with Trump so optimistic over the trade deal.”

Gold rallied around 1% earlier on Thursday after jobless claims surprised on the downside, coming in at 252,000 versus the expected 213,000. Also, the ECB maintained its “highly accommodative” monetary policy in a continued attempt to push inflation higher in the first monetary policy meeting headed by the central bank’s new president Christine Lagarde.

Streible does not rule out another wave down in gold, with prices touching $1,423 an ounce.

“The only thing that could help the gold bulls at the moment is if someone [from the Trump administration] comes out and says that they are nor afraid to walk away from the U.S.-China trade deal,” Streible added.