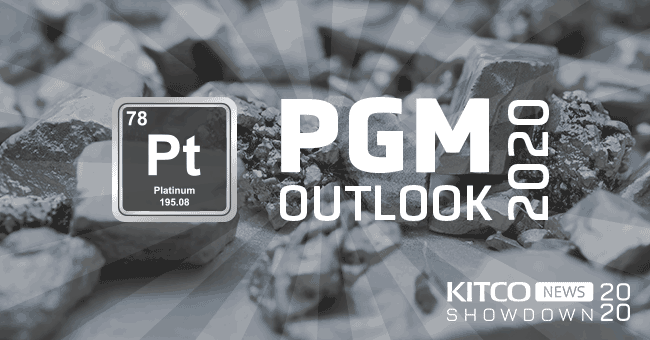 (Kitco News) - Palladium remains in a large supply/demand deficit due to strong auto-related consumption, and as a result, prices are likely to remain at historically high levels during 2020, most analysts said.

Nevertheless, after the sharp gains in 2019, the forecasts from most analysts list average prices that are below the all-time highs hit this week. Some analysts see potential for yet another record high in the New Year, but others warn of a correction lower in this high-flying market.

Platinum is expected to rise as well in 2020, but any gains are expected to be modest, leaving platinum at a large discount to its sister metal palladium.

The primary use for both metals is catalytic converters. Palladium is used with gasoline-powered engines popular in the No. 1 and No. 2 car markets of China and the U.S. Platinum is required in diesel-powered cars popular in Europe.

As recently as two years ago, platinum was the more expensive metal, before palladium soared into the stratosphere. There has been conjecture that auto manufacturers will start substituting more platinum for palladium in catalytic converters, but so far this shift has not occurred, observers said.

Car sales are down in 2019, which normally would mean less palladium demand. However, this has been more than offset by increased loadings of palladium in a number of nations, including China and India, observers said. In particular, China is undertaking more stringent environmental regulations, and this is expected to increase palladium loadings in each car by around 50% this year and perhaps another 10% next year, explained Suki Cooper, precious-metals analyst with Standard Chartered.

In fact, TD Securities looks for global palladium demand to rise by more than 4% in 2020 while supply growth increases by only 0.6%, said Bart Melek, head of commodity strategy. Besides the increased loadings per vehicle, TDS looks for car sales to pick up again.

“We are running out of inventory,” Melek said. “Really, ETFs have been used to supplement supply.”

He was referring to exchange-traded funds, which trade like a stock but track the price of the commodity, with metal put into storage to back the shares. These holdings are currently down to around 610,000 ounces, compared to 1.6 million at the beginning of 2017, Melek explained.

“In the near term, there doesn’t look like there is going to be any substitution [away from palladium] or any significant increase in mine supply,” Cooper said. One of the major palladium projects in the world – by Russia’s Nornickel – is not expected to come on line for at least another two years, Cooper added.

“With little participation from speculators…palladium's price will have to rally towards $2000/oz by year-end in order to incentivize speculators to part with the metal,” TDS said in its commodity outlook report. “Periods of extreme scarcity may arise, which may lead to temporary shocks in lease rates.”

Others see prices remaining historically high but pulling back some from where they are now. Cooper expects palladium to average $1,653 in 2020. She looks the second quarter to have the lowest average price of $1,600 an ounce, but then rising to an average of $1,710 in the fourth quarter. The physical tightness in the market may abate, Cooper said, but she looks for prices to be underpinned by buying that emerges on any price dips.

Others look for bigger corrections. ABN AMRO called for $1,450 palladium by the end of 2020, while Commerzbank projected $1,500.

“We continue to think that palladium price increases are not justified by the fundamentals, and that prices will fall back,” said a report from Georgette Boele, senior foreign-exchange and precious-metals analyst at ABN AMRO.

Platinum rose more modestly in 2019. Analysts look for another pickup in 2020, but prices are likely to remain at a large discount to palladium.

For one thing, platinum does not have the huge supply deficit of its sister metal. Cooper listed a modest projected surplus of 77,000 platinum ounces next year after an expected deficit of 226,000 ounces this year. TDS looks for a modest deficit of 63,000 ounces in 2020 after a balanced market in 2019.

Savant noted that supply concerns in the market abated after a wage agreement in the South African mining industry, removing potential for major supply disruptions. “You do have a fair amount of inventory for platinum,” Savant continued.

That doesn’t mean all supply worries have gone away, however. In December, rolling power blackouts – due to an electricity shortage in South Africa – led to curtailment of mining operations and boosted prices of platinum group metals.

Consumption has been held back by shrinking demand for diesel-powered cars, Savant said. Further, China’s jewelry buying was hurt by a slowing economy. Still, Savant does not look for a major downdraft in platinum prices.

“We think we are close to the bottom,” he said.

Commerzbank said it does not look for a sharp rise in platinum prices until there is more substitution of this metal for palladium in auto catalysts. The bank called for prices of $950 by year end, helped by spillover buying from a stronger gold market. Commerzbank listed a full-year 2020 platinum average of $900 an ounce.

Substitution and the supply picture will be keys for platinum in 2020, Cooper said.

“Many investors, particularly those in ETFs, tend to be longer-term investors looking for longer-term value,” Cooper said. “One of the potential positives for platinum is that at some point, meaningful auto-catalyst substitution [into] platinum materializes…”

That substitution demand may not materialize significantly in the short term, Cooper said.

“We believe potential for substitution toward platinum is at least 12 months away, i.e, toward the end of 2020,” Cooper said.

Others cite technical challenges to substitution while ensuring regulations are met.
Meanwhile, any meaningful increase in mine supply appears to still be a couple of years away, Cooper said. Major producers cut back on capital expenditures around 2012 as prices of precious metals fell.

“It typically takes about 10 years for a new mine to come on line, which suggests there could be a drop in platinum production,” Cooper said. New projects are not expected to start producing significant volumes of the metal until around 2022 or 2023, she continued.