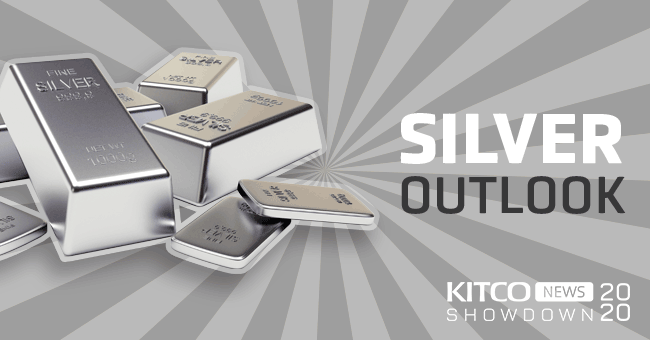 (Kitco News) Silver is looking to play catch-up to gold and potentially outperform the yellow metal next year, according to analysts, who are eying the U.S.-China trade progress and silver's improving demand as key drivers.

Both silver and gold had a stellar year despite dropping off its 2019 highs reached this fall. During the last 12 months, spot gold rose around 19% and silver advanced 16.9%, according to Kitco's aggregated charts.

"For silver, trade negotiations are one of the key risks. Given the impact, it has on industrial demand growth, economic growth, and outlook for the tech sector," Cooper said. "We do expect the Federal Reserve to remain on hold in 2020, but there will likely be continued concerns around the U.S.-China trade negotiations… Given that there is still negative-yielding debt on a global basis, this is likely to create a positive backdrop for safe-haven assets."

The outcome of Brexit will also play a key role, especially from the perspective of its impact on European growth, Cooper pointed out.

"For gold and silver, it is going to be the macro-environment that is a key driver," she said. "We think the trade tensions will be the underlying theme for the complex as a whole, whether that's going to impact industrial demand or auto sector growth. Or whether that triggers safe-haven interest in gold and silver."

One of the more popular calls for silver next year is for prices to trade around $18 an ounce, with most gains set for year-end.

The Dutch bank ABN AMRO projects silver to reach $18 an ounce by year-end after averaging $16.60 throughout 2020.

"We think that an aggressive sell-off in silver prices in the coming months will be an opportunity to position for higher prices later in 2020," ABN AMRO senior FX and precious metals strategist Georgette Boele said. "Silver prices will probably be more supported if global growth and global trade start to stabilize and improve somewhat."

Strategists at TD Securities see silver's potential peaking at around $20 an ounce next year. "Silver [could] jump to $20/oz by the end of 2020 in response to its firming fundamentals and spillover investment demand from the yellow metal," the bank's strategists told Kitco News.

"A lot of the drags on growth, such as print episodes of deleveraging in China, tightening in the U.S, all been flashed out. Going forward, we should see some improvement," TD Securities strategist Daniel Ghali added.

Silver could be looking at a fairly wide range next year, with support at $13 an ounce and resistance at just below $21, according to Kitco's very own senior technical analyst Jim Wyckoff.

"The monthly continuation chart for nearby Comex silver futures reveals prices are in the middle of a wide trading range, bound by longer-term chart resistance at the 2016 high of $20.825 and by the 2015 low of $13.666," Wyckoff said.

Silver's technical picture going forward looks neutral, neither favoring the bulls or the bears, added Wyckoff. "The monthly chart suggests that in 2020 silver prices will continue to trade in choppy fashion within the range defined by the support and resistance lines seen on the chart," he said.

Silver could outperform gold in 2020

One of the significant concerns with silver this year has been its underperformance in comparison to gold, especially when prices hit multi-year highs in August and September.

"Whereas the gold price was trading at a 6½-year high in September and was only 20% short of its all-time high, the silver price achieved a three-year high of just under $20 at the same time. This still left silver 30% below its spring 2013 level, however – not to mention a long way off the all-time high of around $50 that it had reached in 2011," Commerzbank said in its outlook.

As we countdown to the new year, many analysts are now more optimistic on silver in comparison to gold. Silver could outperform gold next year, said TD Securities commodity strategist Daniel Ghali, noting that the gold-silver ratio could improve in favor of silver.

"Over the last few years, investment for silver and gold disconnected quite a bit. Over the last few months, however, there have been signs that the correlation of investment activity for both metals has turned positive again," Ghali told Kitco News. "We are optimistic on the prospect for gold, but we think it will pay off more for those who are to purchase silver. We think the industrial demand side of the equation will improve later in the year."

RJO Futures' Streible is also more optimistic on silver due to its demand component. "The ratio between gold and silver will continue to crack lower, favoring silver and taking away from gold. Silver will take from some of the other metals like platinum and palladium and the trade deal will help boost the technology demand for silver," Streible highlighted.

On the other hand, Standard Chartered's Cooper said silver might fail to outperform gold next year, noting a lack of tactical positioning in the metal.

"Until we see firming in underlying supply and demand dynamics and investor interest, it is likely we are going to see silver playing catch-up with gold but perhaps not outperforming it just yet," she said.

"We expect silver to remain elevated, but we do not see a sharp move higher. For silver prices to move sharply higher, we would need to see solid growth in terms of industrial demand as well as continued interest on the investor side," she said. "In terms of the upside, there is still room for investors to position in silver. The biggest upside risks are for the Fed to start cutting rates in 2021."

A very rare silver buy call came from the CPM Group ahead of the new year. The group issued an intermediate-term silver buy recommendation for investors in December, stating that "the silver market is at a critical vertex at present."

Silver prices are more likely to rise than fall in the next few years, but uber bulls might still be disappointed, explained CPM.

"Silver market fundamentals are precariously similar to the critically poor conditions that existed in 1989. Our expectations are that the market may avoid the long period of net investor silver selling and low prices that followed from that year," said CPM Group's vice president in charge of research Rohit Savant.

CPM defined its intermediate timeline as between two and three years. The last time CPM issued a recommendation on silver was back in May 2011 when prices reached $48.19 and CPM advised to sell.

"CPM has waited until now for a variety of reasons known to our clients. For one, the market has not supported strongly higher prices over the past few years. As a result, prices have not moved sharply off their 2015-2016 lows," CPM managing partner Jeffrey Christian clarified.